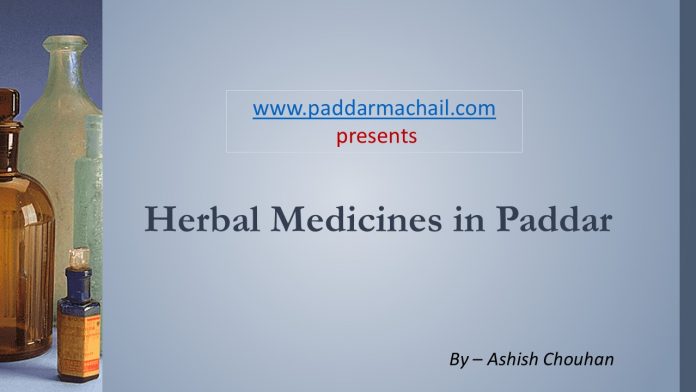 We are living in a country where about 54 percent of the land is under cultivation for food, ornamental and medicinal plants. It is also right that India is a largest producer of medicinal plants and is called botanical garden of the world. Thousands of plants with medicinal properties grow in India. Potential medicinal plants with official documentation are about 3000 but it has been researched that traditional practitioners across India know about 8000 such plant drugs.

Their growing importance is owed to their efficacy and negligible side effects. 70% of Indian Medicinal Plants grow in the tropical region of seacoasts, Vindhyas, Chotta Nagpur plateau, Aravalis and Himalayas. “Paddar-The Sapphire Land” as we all know is also situated in the lap of lesser Himalayas. So occurrence of plant medicines in the basket of Paddar is unquestionable.

We are using these floral medicines since the times when our Paddar was disconnected from the rest of the world. At that time when there were no hospitals and doctors available there to cater to the ailing population of people in Paddar, traditional hakims had monopoly over the knowledge of such plant drugs. They were always there to help the needy one with their set of collected barks and leaves. From cough to jaundice and mental-sickness to piles there was always a pill or bottle of paste in their bags to cure that. There is no dearth of floristic treasure in Paddar. It is another talk though that with the passage of time and advent of modern medicines people of Paddar showed listlessness in medicinal plants and hence in the way lost touch with the natural gluts. Also it is not quite true that this knowledge of plants moved into the thin air from the landscape of Paddar. There are still some traditional hakims in Paddar who possess this unique knowledge of plants and there are still some herbs, shrubs and roots which are in use in the current times. Here is a list of five such organic medicines:

Here is a list of traditional names of five such medicinal plants with uses:

Before you use these it is advised you consult a traditional hakim who has good experience of these plant medicines. In every village you can find one. My grandfather Sh. Thakur Chand ji is also good at this. It is his suggestion that I am placing the photographs of these herbal medicines before you. There are plenty of other such plants with medicinal properties in Paddar which are in use nowadays. We shall upload it next time with complete details.

Do you know that in rural India about 71% of the population depends upon traditional system of medicine? Today many countries are spending huge sums of money in the research of these plants. Paddar valley also needs an urgent research team which can unearth the hidden treasure and give to the world a gift of many such traditional medicines with zero side – effect percentage. Ethno-Botanical Study of Medicinal Plants of Paddar Valley has been conducted by teams though but still we feel from the data that they have published on their website that much can be collated after contacting more and more hakims in Paddar. This Biodiversity rich valley of Paddar has a lot of other medicinal things in Paddar like Kaala zeera (Bonium persicumm), Patish ( Aconiitum heterophyllum ) and Kuth( Saussurea costus) about which the world crave for.

This would become our next topic of article. Thank you.

Please drop your comments regarding the post it will help us in evaluating our service. Your support is our oxygen, so keep supporting, sharing and guiding.

A Poem on Specially Abled Persons