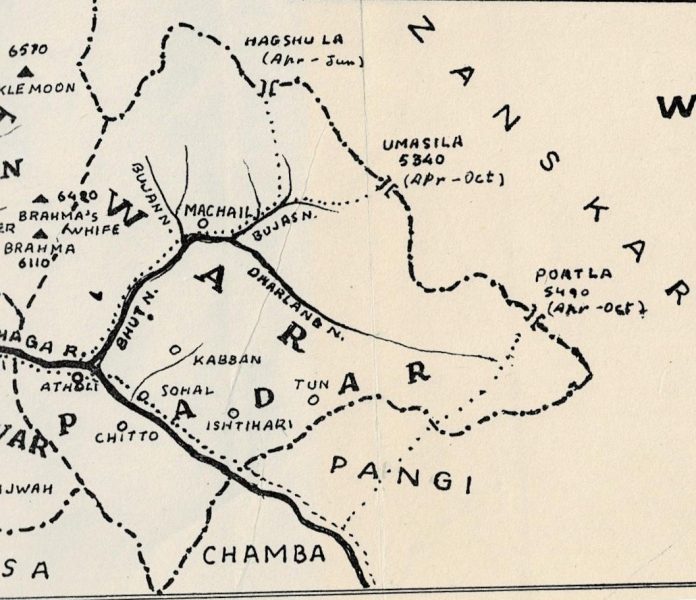 Paddar is a beautiful mountainous region with several exciting treks, many of them virgin. The trek through Machail to Zanskar is the best known. There is a considerable snowfall during the winter.

Nasir Faridi calls Paddar “The valley of sapphire” because of the continental superiority of the gem. However, The Bitumen or Shilajit mines are also located at various places. It has great medical properties and is generally used with milk.

Though Paddar has a long history, as it has been presented by different men of knowledge from different arenas under the aegis of senior researchers and their work.

I am through this article going to bring out some historical as well as geographical aspects of the region-Paddar.

We have no authentic records about the original inhabitants of Paddar. The region has been also mentioned in Kalhan’s important work “The Rajatarangani”.

The Hindus of the area worship Nag Devta (The Snake God) and Shakti, (the mother of Goddess).

The Naga cults seems to have been predominant throughout Paddar, as the doors of the temples in every village of Paddar have Naga images carved on them even at present.

The evidences of Naga worship, which is, however related to the worship of Vedic God Shiva, lead to infer us that with the passage of time more aborigines of Paddar have either descended from Aryan race or been influenced by Aryan culture and way of life.

But the regular scrutinization following the experimentation proclaimed that this region were mainly ruled by the local chieftains called ‘Ranas’ before the 17th century who were ritually superior to the Thakurs in this region. We have heard stories about Rana of Paddar, A group of three or four villages had a Rana of their own like Rana of Leondi, Rana of Sohal, Rana of Garh, Rana of Massu and it is evident that their pedigree is even now presenting a share in the history of Paddar.

Kishtwar Rajas invaded Paddar but conquered upto Atholi only and returned with large booty. After their return the Ranas practically ruled their principalities independently. In the middle of 17th century A.D. Chattar Singh, the Raja of Chamba attacked Paddar and conquered it. All the Ranas became subservient to him and paid tribute. They now held the post of ‘kardars’ in their respective estates. He constructed a fort and named the place Chattargarh after his name. From Chattar Singh’s time onwards Paddar remained comfortably under the Rajas of Chamba for five or six generations. The Raja of Chamba led an expedition to Zanskar, which was held by a Bhot Raja under Ladakh in about 1820 A.D. or 1825 A.D. and conquered it. The Bhot Raja agreed to pay 1000 rupees, besides musk bags and other things annually as nazar (present) to the Chamba Raja. This amount was collected by Ratnu Palsara of his own accord. When Zorawar Singh conquered Paddar Ratnu fled away to Chamba where from he was sent to Jammu as a prisoner. However, Raja Gulab Singh released him from the prison and took him in his service.

Coming to the geographical aspects, I firstly want to hone the concept in your esteemed knowledge that the “reign of Rana Chieftains” can only be subsumed through archeological surveys.

Paddar is situated 33.15′ North 76.09′ East. It is narrow, y-shaped valley suffused in high mountain of North Western Himalayas in southest of District Kishtwar.

Among these Atholi is the headquarter of the ‘Niabat’ of Paddar. It is a picturesque village built on the alluvial pleatue about the 60m above the left bank of the river Chanderbhaga/ Chenab. Across the river, connected by a steel bridge, is Gulabgarh, the other major villages of Paddar. This bridge has replaced the rope suspension bridge that existed here from the 1840s to the middle of the 20th century. Before that, till 1834, there used to be a wooden bridge.

Gulabgarh is famous for its plain deserted area. The Chinar Chowk and a well-stocked market are close to the maidan. Suncham is, the last village in Chenab Valley, Jammu before crossing the Umasi La to enter Zanskar, often called as the valley of Chenab.

There are plentiful of grazing lands on the upper reaches of high mountains in Paddar where Gujjars and Bakerwals as well as local pastures spend their summer month with their flock of sheep and goats and herds of cattle. These pastures on upland provide a majestic landscape to the beholder. The spots are overgrown with wild flowers and herbal plants, shrubs and grass. Some known meadows and pastures are Hagyoth, Haryoth, Mondhel, Bhoozas, Bhoozaunh, Heuzal. In Paddar valley Barnaz-I 6100 meters, Barnaz-II 6290 meters and Shivling 6000 meters high stand around Machail.

The author is a student in Department of Geography in Jammu University.