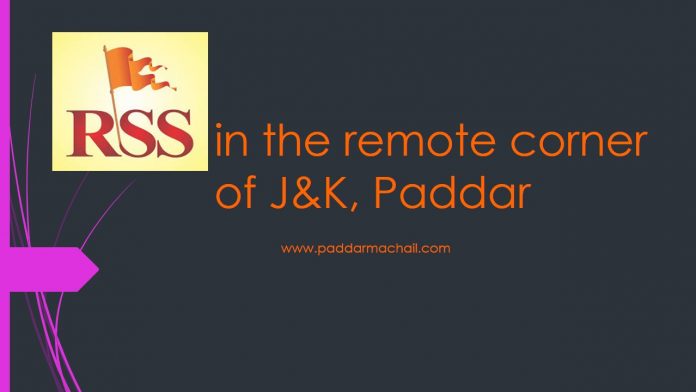 With the formal announcement of Sangh on 27th of September 1925, Doctor Keshav Baliram Hedgewar (Doctor Ji) began its activities from his home at Sukravari in Nagpur. At the outset there happened to be drill practices and discourses on national affairs on Sunday and Thursday respectively. On 17th of April 1926 in a meeting held at Dr. Hedgewar Ji’s house a name popularly known today as Rashtriya Sawayamsevak Sangh (RSS) was chosen out of four names viz. Jaripatka Mandal, Bharat Uddharak Mandal, Hindu Swayamsevak Sangh, and Rashtriya Swayamsevak Sangh for the organisation.

1926 AD was the watershed year in the history of RSS. It was in this year that Nitya Shakhas started functioning in its full glory at Mohitwada ground in Nagpur. In the same year in these Nitya Shakhas danda, salutation to the Bhagwa Dhwaja and other commands like daksha, arhama etc were also introduced. Only 30 members participated in the first Pathsanchalan of RSS.

Click to know about the beautiful waterfalls of Paddar.

It didn’t take long for the RSS to become one of the world’s biggest nationalist organisation on the planet. This feat would not have been accomplished without the lively vision of its founder and active participation of its swayamsevaks. Along with its pan-India outreach it has now set strong foothold in many other nations as well. This is not a story of today, RSS is penetrating into the cities, towns and villages of this country rapidly since its inception in 1925. Also, ideology of this organisation has not only seeped into the consciousness of the people of north India but into the people of one of the farthest corner of J&K i.e. Paddar as well. In this blog we shall discuss at length about the history of RSS and the role it has played in moulding the nationalist psyche of the people in Paddar.

Roots of RSS are strong in Paddar. One can find swayamsevaks of RSS in almost every village of this subdivision. It is said that first shakha (a fundamental unit of activity of RSS) in Paddar was opened in the 1960s. Owing to its fresh jump it didn’t start on daily basis in the beginning. It was the year 1987 when the nitya (regular) shakhas were first started in the two villages of Paddar viz. Atholi and Sohal. Many swayamsevaks then sprang into action and opened shakhas in about 32 villages of the Paddar. Ashok Ji was the first Pracharak who visited Paddar to spread the message of this organisation. Since then it has not stopped functioning in Paddar, it is another point though that these days active shakhas operate in 14 villages only. Sh. Satya Prakash Ji was the first swayamsevak in Paddar who completed his final training (Tritya Varsha) from Nagpur. Today there are about eight such swayamsevaks who have done their Tritya Varsha. Other than that there are many swayamsevaks in Paddar who have completed their Prathmik (Initial Training Camps, ITC), Pratham (Officer’s Training Camps, OTC) and Dutya Varsha trainings.

RSS in Paddar operates in 6 mandalas with every mandala containing more than 5 villages. From indigenous games to physical exercises and discourses on national affairs to singing of patriotic songs everything functions in the shakhas of Paddar nowadays. Apart from that there are 6 festivals (utsav) which are considered important in RSS, here are these:

Each and every festival is celebrated in Paddar with great pride. Hundreds of people come together on the eve of these festivals. Here is a little information about some of them.

Place of Vijay Dashmi festival is very important in the organisation. Doctor Ji  found RSS in Nagpur on this day. It is also a day (Dussehra) which commemorates the victory of good over evil. On this day swayamsevaks get together at centre places and do pathsanchalan with great vigour. Known for its stern discipline RSS is working wonders in the fields of social welfare. Today there are 60+ such organisations which are the offshoots of this organisation and are doing a phenomenal job in the length and breadth of this country.

Guru Dakshina is a very important activity which takes place in RSS. On this day swayamsevaks from the nooks and corners of this country offer monetary grants at the Bhagwa Dhwaj in the middle of August. This money accumulated is then used for sustaining all the activites of the Sangh. Guru Dakshina is also celebrated with great enthusiasm in Paddar. It is said that first Guru Dakshna was happened in the year 1995 or 96 in the Paddar subdivision. Here is a picture.

Founded in 1979 with the efforts of the 3rd Sarsanghchalak of RSS Sh.Balasahab Deoras Ji, Sewa Bharti today is the largest NGO working for the welfare of people in the remote corners of this country. Today this organisation is reported to have 13,786 projects in education, 10,908 in health care, 17,560 in social welfare and 7,452 self-reliance projects. These projects aim at making the deprived sections of the society self-reliant in all aspects of their lives. Amidst this COVID-19 outbreak Sewa Bharti is the same NGO which is working shoulder to shoulder with the administration in containing the infection. Recently people of Paddar have also opened a bank account of it in the J&K Bank, Paddar. One can help people by providing monetary grant in the form of charity to this organisation. Here are the details of the recently opened account:

According to 2017 figures there happens to be around 57185 (nitya) daily Shakhas, 14896 (milan) weekly gatherings and 7594 (mandli) monthly meetings all across the country. This organisation which has seen 6 sarsanghchalaks so far is now growing at must faster rate than ever before. It has seen 3 bans in its life of 95 years due to its nationalist ideology. Its works are worth appreciating. All I desire that Paddries who are inclined towards the ideology of RSS, those who have joined RSS and those who are averse to the though of RSS must gain much information about this organisation so that they could supplement their knowledge about it for their better perception before indulging in any activity. Swayamsewaks call RSS a Man Making Machine, though how true is their claim I leave it up to you. I want you to see it and understand it by yourselves because only when you have understood its relevance and importance in the current world can you become a good swayamsevak or RSSian.

As far as I am concerned let me tell you that I am a great supporter of RSS but at the same time I am also against those who in the name of RSS indulge in anti-RSS activities or who pretend to be sound swayamsewaks but in turn hurt the very essence of this organisation by openly defying its principles. Further, I must tell you that the 4th Sarsangchalak of RSS Sh. Prof. Rajendra Singh, popularly known as (Rajju Bhayya) was my favourite.

What are your opinions about the RSS. Please comment and yes do not forget to share. Your support is our oxygen.