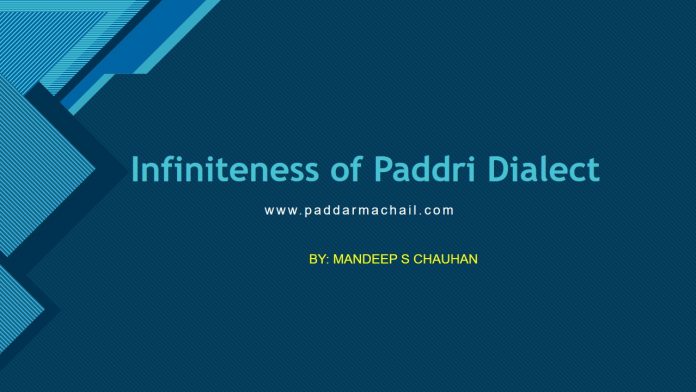 In this article titled ”Infiniteness of Paddri Dialect – The Elegance and Jollification of words formed by Paddar Region – A Native – Tongue, its Hollowness and Acme; a point of Perfection” , I am supposed to zoom in and zoom out the origin of the Paddri dialect. If this empowers even a handful of additional people to join the debate about the origin of Paddri dialect and its various aspects, I have done my job.

“Language is a system of sounds, words, patterns etc. used by humans to communicate thoughts and feelings.” (Advanced Learner’s Dictionary). Language allows us the means of recognition of representation and resource generation, all of which are not simple commodities but values and choices of life.

Our native tongue is amazingly supple. I mean, like others it too through connecting a limiting number of symbols and signs produces an infinite number of sentences each with a distinct meaning. We can hereby ingest, store and communicate prodigious amount of information about the surrounding world. This has been propounded through different theories by different scholars and researchers that we Paddries are the migrants of Pangi and we have to agree because of the geographical proximity, but this is not the end, we also have a vicinity of different other areas. According to some artefacts “We have a meagre access to inter-state migration viz. Rajasthan, Punjab, Uttar Pardesh following the Age of Conflict amid 10th to 12th century when India was ruled by Turkish tribesmen from Central Asia. The Turkish tribesmen brought with them the habit of ruthless plunder in northern states. The Ghaznavids, the Turks led all the happenings to an exodus.” This has been popular in terms of the origin and development of our dialect. Either this native tongue is a pure subversion of Pahari or a mixture of various denominational dialects viz. Nepali, Punjabi, Sindhi, Chattisgarhi, Hindi and English. Paddri dialect is also coterminous to Bhaderwahi and Gojri in some words. This is due to the fact that all these dialects have the same benefactors.

You can also read an article of Paddri dialect by Ashish Chouhan: Click Below:

So on the spur of the movement it evolved as a means of sharing information among the people of the region; evolved the way of gossiping and as a unique language. In this way the disheveled tongue has congregated and now in complete fervour with sheen ness and a huge access.

Several attempts have been made to flourish the Paddri dialect in the past through presentation and performance in various cultural programmes. This has brought a bit recognition at state level. We also have a great history of poetry, various poets have been contributing to Paddri dialect through their amorphous and heterogeneous thoughts including folk phrases, idioms, prominent places which are often heard in history and style of love-making in their works, among them Navrattan Shetyan, Jawahar Lal Anjana, Master Shadi Lal etc. are the distinguished figures. Their poetry is basically based on the concept of preservation and promotion of the native tongue. Concepts have generally been drawn from different known and unknown sources. Their zeal and zest and assiduous attitude towards the development of the dialect has given the poetry different shape. In this context a didactic poet and a JNU based Urdu PhD. Scholar Mr. Fulail writes;

Saaf Na Zameen Thi, They Katiey Zaala (with a barren land full of thorns and bushes)

Swari Swari Bassey Gwal – puhala, O Monhuaa I Hareigaa (Slowly and slowly it was habituated by the milkmen, O Man! Come and see)

These lines are a certain kind of propoundance and revelation which heightens the imaginative minds to ponder upon the concept- origin of Paddar and yield the contemporaries to think, write and debate.

As the bee carries pollen from flower to flower, so to say our dialect. We have cogent figures to believe that this dialect is embracing everything that comes along its way. Like it has embraced and assimilated diverse musical thoughts and forms, fashion tantrums following cultural transmogrification and technology and cybernetics. Bohemian vocabulary of young juveniles has also been welcomed by this dialect in myriad ways, it has been progressing and embracing people from diverse communities. All these arenas giving the local dialect to develop and flourish to certain heights with immense potentialities. This is what had happened in the past. Whatever we have right now in the form of Paddri dialect had gone under desolation following a transition, too.

In between, even the so called ‘uncourteous’ words have a huge contribution. However, their usage in common parlance, colloquially supposed to be banned, me thinks, it would be a huge loss for the semantic, phonemic and a history of words. Yes, we can abnegate gossips because it usually focuses on wrong doings. Polite and courteous words have their own ill effects. The chief aim of words is to give meaning to meaningless. If you wish, ‘Assalamu-alykum’ to an orthodox Brahmin he would say hell things in favour of this. Albeit, we know the immensity of ‘Assalamu-alykum’ .Let me point out here the strange ways in which the question of linguistic development is often presented by people.

Karl Marx called language a productive labour which cannot be subsumed under the technicalities and sovereign powers of the state. Thanks to the sovereigns of our region their tripartite institutional arrangements have nothing to do with the local dialect.

Style of writing:-  Either to follow Devanagari with Urdu and English. The study of language and practice of composition and elocution are the first steps in mental culture. We should acquire a good command on our mother tongue to grow our natural mental ability. If you respect your language / mother tongue. Hail! The native dialect, you are respecting your society. There is a stringent need of Paddri Dictionary which includes accents, phonetic symbols for words like:

Fodder made of maize, barley, wheat in order to serve the livestock viz. goats, Sheep and Cows:- Dlaa

Quintessential surveys have been made by different scholars, authors, students, servicemen candidly endeavoring to mitigate the exigencies which subordinate the dialect, the native tongue of the people. There is importunate need to showcase the dialectical propensity of Paddar. Affronting aspects in terms of cultural legacy, chivalrous history, personas who gifted Paddar a plenitude quality. Most of the contemporaneous engagements have been giving a huge dialectical fervor of jostling where an ongoing expression of scholarly work that could qualify ‘the local dialectical upsurge’ a movement of preservation, protection and dissemination. It has already been stated by the All India Radio that the dialect of with 10000 listeners and speakers can access the opportunity to present themselves in the regional radio station.

I have just, tried to give trajectory of thoughts to that what had happened. At least our dialect has right now a population of 30000 approx. It has all those algorithms through which we can understand the whole world. What is required, is that, it should have a script, writing style and literary representation. And last but not the least it is just an outline to draw the kind attention of our respected readers and speakers to familiarize the concept to ponder on it.

So, let’s join hands in an attemptability through direct and community participation to maintain and sustain the dialectal and cultural legacy of our Paddar.

The author is MA in English from Jammu University.

A team brimmed with enthusiasm and everlasting love for its motherland is behind the creation of this lovely and informative website. Paddar, often used with the synonym names like “The Sapphire Land”, “Abode of Chandi Mata Machail” and “Devsthan” is a beautiful place on earth situated in the lap of lesser Himalayas.
Contact us: piousteam2018[email protected]