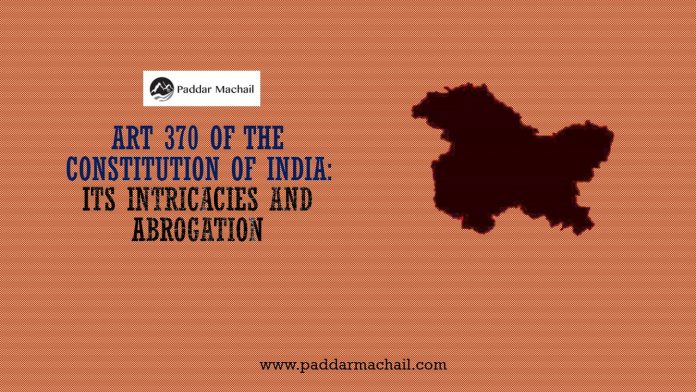 While rest of the India was under foreign yoke, Jammu and Kashmir was an Indian State ruled by a hereditary Maharaja like many other princely States. The State of Jammu and Kashmir was ruled by Dogras under the treaty of Amritsar signed in 1846 whereby the Maharaja Gulab Singh bought Kashmir for seventy five lakhs rajshahai rupees. The Dogras were benevolent towards their subject unlike Muslim rulers who ruled from the fourteenth century onwards except for a spell of good governance under Zain-ul-Abidin. However, the Muslim subjects of Kashmir were not happy with Hindu rulers. They alleged discrimination on religious line, the dissent against the ruler eventually translated into violence against Hindus and Pandits of Kashmir became the victims. It was 1931, when Kashmir witnessed mass uprising against the then Dogra Maharaja Hari Singh, mob vandalized the minority Hindus, their property was destroyed and several were killed. It was the time when Sheikh Abdullah (The tallest political figure of Kashmir who later came to be called as ‘Lion of Kashmir’) got the political recognition for the first time and he called it a day in the politics of Kashmir and protested among others against police firing on a mob outside the court on 13th July, 1931.

In 1932, Muslim Conference was formed and Sheikh Abdullah was elected as its first president. In 1939 it was converted into the National Conference and Sheikh Abdullah continued to be its president till 1953. He carried a series of anti-Monarch protest deriving most of its inspiration from Indian National Movement and under the guidance of Mahatma Gandhi and Pandit Jawahar Lal Nehru. In 1946, when cabinet mission headed by Lord Penthick Lawrence came to India, Sheikh Abdullah projected the problems of Kashmir and raised his voice for its right to freedom. When it was almost decided that British Government has made their mind to hand over the administration of British provinces to Indian National Congress and was not doing anything about princely States Sheikh Abdullah sensed it well to strike while the iron is hot and launched the “Quit Kashmir” movement and challenged the Maharaja’s right to rule the Kashmir for which he was sentenced to nine years imprisonment in May, 1946. However, after India attained Independence he was released on 29th September, 1947 and continued his movement against the monarchial rule of the State.

Click for the Article: Paddar-A viable Geo-strategic Option for India

While all the princely States acceded to the Dominion of India, Maharaja Hari Singh desired to remain Independent. In October, 1947 Pakistan supported and organized tribal attack from Northwest Frontier Province to occupy Kashmir.  When the situation turned against, the valley was about to fall in the hands of invaders, Maharaja Hari Singh sought the help of India after executing an Instrument of Accession on 26 october,1947 similar to that executed by the rulers of other Indian princely States. Thus, India acquired the jurisdiction over the State with respect to defence, external affairs and communication. The Indian army arrived in Srinagar and repulsed the invaders. The doors of India were opened to people of Jammu and Kashmir with the Instrument of Accession but hearts of the Indian leaders never opened to Maharaja of the State. Sheikh Abdullah, who had developed good relationship with Indian National Congress and had close rapport with Pandit Jawahar Lal Nehru, was accepted as popular leader of the Kashmiris by Indian National Congress and on 31st October, 1947, he was appointed head of the Emergency Administration  and then on 5th March, 1948 made Prime Minister of the State. In 1949, he was inducted into Constituent Assembly of India and so became signatory to the Constitution.

Click for the article: Tourist Places in Jammu Region

Article 370 added in the Constitution

When the Constitution of India was being made Art. 370 got incorporated in the Constitution of India which provides special treatment to Jammu and Kashmir such as separate Constitution. The State, as such has its own flag, non-State subject cannot own immoveable property nor can acquire citizenship. However, Sheikh Abdullah was not satisfied with afore said provisions and was also suspected of working for the secession of the State from India and therefore, he was arrested on August 9, 1953. Therefore, the seeds of secession were if sown by none but he (Sheikh Abdullah) had. Since then, the struggle from autonomy to greater autonomy and finally to separation from India was being carried by Anti India sentiments in Jammu and Kashmir.

If the struggle for its secession was carried by anti-India forces, the struggle for its complete unification into India was carried with no less intensity by nationalist forces. Dr. Shyama Prasad Mukherjee, founder member of Jan Sangh was opposed to any such moves which posed threat to National Integrity. He fought for the abrogation of Art. 370. In opposition to two constitutions, two flags and two prime minister, he propagated a famous clarion “EK DESH MAIN DO VIDHAN, DO PRADHAN AUR DO NISHAN NAHI CHALENGE”. He sacrificed his life for the cause of national integrity in a mysterious condition under detention in Srinagar.

Sheikh Abdullah continued his secessionist activities; he carried his activities outside the country with non-friendly nations, he kept on negotiating with Prime Minister Pandit Nehru in India and President Ayub Khan in Pakistan, his trilateral negotiations made him suspect in Indian political circle. Though liberal measures were introduced in the State of Jammu and Kashmir by the adoption of a separate State Constitution the anti-India elements continued their agitation for holding of plebiscite by ‘Plebiscite Front’ formed with object of secession from India.

Click for the article: Martyr JCO Chuni Lal- A War Legend of Paddar

This secessionist tendency was not something which was imported from somewhere else but was inherent in the Constitution of India itself. Art. 370 had already exposed the skin to the wolf. Political circle in Kashmir had always complained erosion of Art. 370 and pre- 1953 position of Jammu and Kashmir.  National conference had been through various election manifestos promised to the people of Kashmir Autonomy/ pre- 1953 status of the Jammu and Kashmir. This separatist movement saw as abrupt upsurge with outbreak of terrorism in Jammu and Kashmir. Secessionist tendency was fumed by religious fanaticism. Trained armed terrorist from across the LOC let loose on the innocent Hindus which led to the infamous mass exodus of about four to five lakhs Kashmiri Pandits to Jammu and other parts of the country.

Art. 370 remained in debate ever since its incorporation. While on one side Kashmiri leadership wanted to make it immune from erosion and pleaded to strengthen it, on the other side Jan Sangh and then Bharatiya Janta Party have been raising their plea for its abrogation. Bharatiya Janta Party pleaded that President should declare that Art. 370 shall cease to operate as the makers of the constitution of India intended that the special status was granted to Jammu and Kashmir as a temporary measure and Cl(3) to Art.370 vest power in President to put an end to Art. 370. And also that anti India element has abused the special status and it promotes separatist/ secessionist tendencies in people which threaten the unity and integrity of the Nation. Art. 370 had added more to woes of the people of Jammu and Kashmir than unleashing prosperity in the region. However, this dream of Bharatiya Janta Party took over seventy years to come true on 5th August, 2019 when Narender Modi led NDA Government took the historic decision to abrogate Art. 370 thereby putting a permanent dot on the unending debate to this Constitutional fallacy. Modi Government along with the abrogation of Art.370 also scraped discriminatory Art. 35(A).

Abrogation of Art. 370 shut the door of secessionist politics and shattered the hope of the separatists. Now people of India are celebrating the first anniversary of abrogation of Art. 370 and they have every reason to do so. It has ended, the deprivation of citizenry privileges to West Pakistan refuges of 1947, the gross injustices inflicted on Valmikis brought from Punjab with assurance of better life and livelihood, discrimination and the regional biasness towards  Jammu and Ladhakh and above all the saga of stone throwing in the name of democratic protests. The Jammu and Kashmir has ushered into an era of inclusivity; transparency and accountability in administration, reconstruction of dilapidated State’s Economy, rebuilding Tourist places ruined due to terrorism and employment generation are the key areas undertaken by the Government. However, there should be no reason for the current dispensation both in Jammu and Kashmir and at Centre to be complacent for the aspiration of the people of Jammu and Kashmir are high and yet a lot has to be delivered.