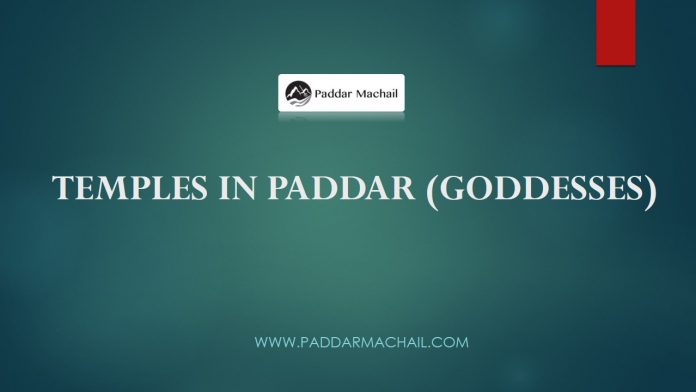 Religious Heritage of Paddar includes monuments and traditions and also some cultural practices which are inherited from our ancestors and passed on to our descendants. Such as oral tradition, social practice rituals and festive events etc.

Paddar valley is known as Devbhoomi, land of Gods and Godesses, because innumerable temples and shrines with glittering holy flags soaring into the sky, dot the Paddar’s skyline thereby creating an ambience of joyful and peacefulness. Paddar is a subdivision which is popularly known as Sapphire Valley inhabited by all three religious communities viz. Hindus, Buddhists and Muslims. All three communities live together with peace, cooperation and harmony.

Keeping in mind these common beliefs and ideas a question arises that how these people are cooperating and living together amidst huge religious diversity and plurality. In order to explain these questions we will disclose some information about the religious heritage of Paddar and how this heritage is facing challenges in the 21st century. Let us explore some famous religious places of Paddar. Bodybuilding per ragazzi: allenamento tricipiti esterni testosterone propionato compresse donne bodybuilding e bodybuilder – consigli, allenamento, palestra, salute, sfondi e video. Paddar is a called Devbhoomi because of the presence of innumerable female and male deities and their temples at different places.

The magnificent temple complex is situated in the heart of Machail village. Chandi mata Shrine is very famous among the Hindu Community. It is one of the most famous and oldest temple of Paddar which enhances the beauty of Paddar. It is located at village Machail which is about 32kms away from main base camp Gulabgarh. It is believed that in this temple Goddess Durga exists in the Pindi form (roop) which is known by the name of Kali, Chandi and so on. This temple has its own unique history and story as well. People from J&K and other part of a country come here to get their wishes fulfilled. They had seen living miracle of the Goddess Chandi Mata. The idol and Pindi form of Chandika are well-known for shaking their jewelry of their own without any vivid wind force.

Machail Mata Shrine is a sacred place and conflicts like these must be resolved urgently. For this, we need to develop a sense of responsibility among the people of Paddar to sort it out. There is also a grave need to bring in a radical reform in the system to make it proficient. It is a matter of great concern for the prominent citizen of Paddar to make an effort in this direction.

Singhasan Mata, Chitto, is one of the oldest and beautiful temple of the     Paddar valley. It is situated at village Chitto which is about 16 kms away from the main town of the area, Gulabgarh. After Machail Yatra which started in 1987, Chitto Yatra is second oldest Yatra in Paddar. Singhasan Mata here also exists in the form of Pindi roop. It is believed that Singhasan Mata lives behind the drape and that no one is allowed to peek inside the curtain. If one does so and goes against the existing mythological rule one would lose his/her eye sight for entire life. Temple has many connections with legends. Governing body of Singhasan Mata is called Singhasan Mata Sevak Sanstha. This body looks after the entire Yatra management. The number of devotee are increasing annually. The day is not too far when this Yatra will become as big as Machail Yatra. The Chitto Mata Yatra happens during the month of July. It starts on 1st July and concludes on 12th July that is from Chishoti to ChItto. Recently, a Jyot Yatra of Singhasan Mata is also started. Jyot Yatra starts on 1st July from Jammu, Digyana to Chitoo Durbar. SMSS has made many arrangements for the convenience of the devotees. In the year 2019 the Holy Shrine of Chitto Mata Temple was decorated beautifully by the people of Jammu Digyana who take Singhasan Mata Jyot to Chitto Bhavan. Firstly they had decorated the temple beautifully but it is an astonishing thing that they removed all the decorations from the temple just before the Main Chadi Mubarak would reach there which was coming from Chishoti.

Nav Durga Mata Temple is an ancient type of open temple built on a hill top. This temple is situated on Hgyoth Dhar which is about 15 kms from main Gulabgarh. Nav Durga Mata Yatra commences in the month of August (probably 28th) after the Machail Yatra. The legend or patron of Hagyoth Yatra is Sh. Thakur Lal Ji. He takes Yatra from village Kukandrawn to Nav Durga Darbar Hagyoth. This Yatra is being looked by the local Sanstha. For the convenience of devotees this local managing body has made temporary sheds along the route and provides langar facilities as well. But it is a matter of concern that the number of pilgrims are gradually increasing year by year and the steps to expand the body and to facilitate the proper functioning at Sanstha level are not being sought of expectantly. In fact it is one of the highest temple in Paddar valley.

Sheetla Mata Temple is situated at village Leondi in Panchayat Gulabgarh which is 3 to 4 kms away from Gulabgarh. It is known by many names viz. Sheetla, Sitala and so on, worshipped by many people. It is believed that Sheetla Mata cures poxes, sores, ghouls, pustuts and diseases.

The holy temple of Jwala Mata is located at village Atholi. The temple of Jawala Mata is about 2 kms away from Gulabgarh. The Goddess Jawala is a set of eternal flame and people in all across the country worship Goddess Jawala. They have firm faith in Mata and their wishes get fulfilled here. Locals also perform some religious festivals here. The Goddess is popularly known as Jwala Mata. It is a very sacred place where many people take Yatras in this temple and also perform ceremony of ‘hair-cut’ of their children. There are also other religious festivals which are celebrated here. Especially on the occasion of Machail Yatra the main Chadi Mubarak visits this temple before heading to Machail Durbar.

The holy templeof  Kali Mata was built many centuries ago. It is located at village Sohal about 11 kms away from Gulabgarh. Goddess Kali is also called by many names by the locals of the village. People worship this deity fervently and celebrate some traditional festivals at the sanctum sanctorum. This temple has become popular because the main Chadi of Singhasan Mata stays here at night during the eve of Chitto Yatra.

Nainer Mata temple is located in the small village of Panchayat Ligri, (Kadyulu). This is one of the magnificent temple which is found in the forests of village Ligri. This temple has its own history. People of the village celebrate a festival called Magh Mela Ligri Salar. This is a very famous festival of two female deities known as Naigeri and Naineri. Magh Mela is a 3 day festival which are called called Dhar Zaath, Shail Dui and Ligri Zaath respectively. This festival is celebrated after every 2 years in the month of October.