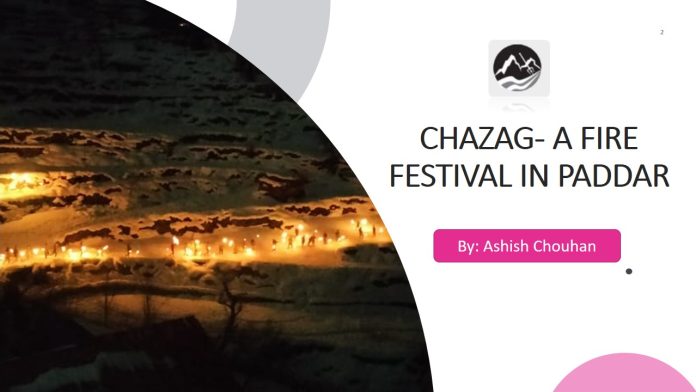 Paddar is a land of myriad festivals. All the festivals that are celebrated in Paddar are in some way or the other connected to the seasons of the year. There are scores of deities in Paddar which are invoked during the celebration of these festivals. Staunch devotees of all the deities dance these days and perform rituals which might look bizarre and unusual to outsiders. Chazag is one such festival celebrated in Paddar. This festival is usually celebrated on the Paush Purnima (Lunar calender) every year. Moreover, this festival is an analogous to the Lohri festival which is popular in the northern India.

Doors of the temples of all the deities in Paddar remain closed in winters except the doors of the temples of Maa Kali. Chazag festival is celebrated with great enthusiasm and fervour in the sanctum sanctorum of Maa Kali. In fact, it begins from the Maa Kali temple. All the villagers excluding members of those families which are mourning the deaths of their relatives that have happened in the past year come outside their homes and celebrate this festival.

This festival usually comes in the month of January every year. It marks the sun’s transit into the Capricorn Zodiac (Makara Rashi). This festival is known by different names in different regions. In Lahul (HP) a festival of this kind is called Halda and in Chamba this festival is known by the name Khoul. On the eve of this festival people gather at a courtyard of temple with dhlyungs (flexible wooden sticks usually made of a plant, locally called Killar). These dhlyungs are sticks with a knot on the top in which kindlings of dry inflammable deodar tree are stashed.

One prime devotee comes up with a huge bundle of deodar tree sticks which is called Diurakh in Paddri dialect. He lights up that bundle of sticks with a holy fire in the courtyard of a temple. All the people who come up with the motive of celebrating this festival light up their respective dhliyungs in the bonfire created out of diurakh.  Then with the loud chants of Jai Maa Kali/Jai Maa Bhawani and reverberating beats of traditional dhol dhouns they move toward a specified place in order to dance with the lit up dhlyung.

Watch the video of this festival here.

After this magical dance they throw their dhlyungs towards a safer place already selected. There are many legends associated with the throwing up of dhlyungs. It is believed that a person who throws it at a maximum distance gets some kind of favour from the gods. After this all the participants are given prasada (mixture of soaked rice and jaggery pieces) who take it to their homes for the family members.

Lohri has a lot of things in common with this festival but it is not celebrated with traditional rituals. Chazag is a part of our local culture. Moreover this festival has different stories attached to it at different places. It is also said that Chazag is comprised of two words Chaz + aag which means a festival of fire with logical rituals. It is likely that the rituals which seems bizaare today were of some significance in the past. This generation has lost touch with the typical local culture and with this a lot of lessons which these festivals are showering upon us with these rituals are invisible to us and which are not murky seems unimportant and eccentric to us.

I hope one day we all shall pay our attention to our unique culture and understand its relevance in the modern times. Thank you!