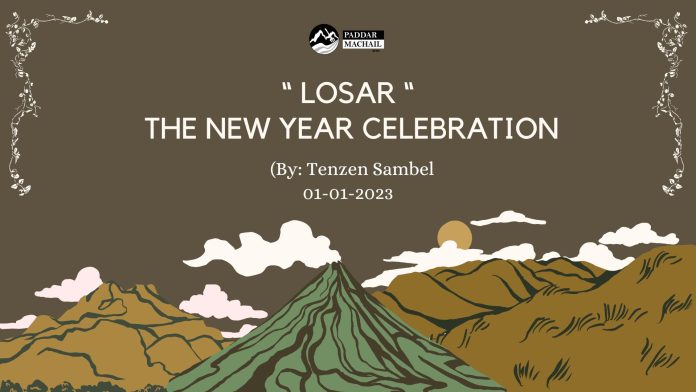 It’s the New Year all around the world, but here in Paddar,

We celebrate it uniquely by the name” LOSAR”,

It is said that every precious thing must be preserved,

Here I am trying to give Losar the recognition it has always deserved!

Back in those days, the celebrations lasted for a week,

Where everyone visited monasteries, as the blessings they used to seek.

People prayed for the wellbeing of their near and dear ones,

Houses were washed and beautifully decorated,

A celebration where every member of the community participated!

I just so deeply wish, such beautiful rituals could be conserved!

Feasts were held and everyone received an invitation,

Colorful clothes and folk songs were the centre of attraction!

But alas! Now those folk songs have been replaced by the modern machines,

Old traditions seem to vanish away as modernization intervenes!

Once upon a time, people felt truly connected with each other,

But now, there is not a single soul, who even tries to bother!

In the greed of skies, people are leaving behind their roots,

But only if they knew, old cultures bear the sweetest fruits!

Because it makes us who we are, it makes our identity,

It is how the villages keep away the chaos of a busy city!

Where is the emotion in sending a mere social media text or a hurried phone call?

Are really all of our traditional values day by day, going to fall?

Adopting the western culture, will take us nowhere,

I don’t know about other, but these are my personal views I am trying to share.

This is my earnest appeal to the present generation,

I am sure you all are willing to understand the importance of every tradition.

Please take a pledge, and an initiative to protect what might be lost,

The essence of the Losar festival must be saved at any cost!!!

It’s not a matter of single individual, but it’s about the whole of Paddar valley,

Both education and ethics need to go hand in hand,

I hope that this is something that every young mind will understand.

Let us come together as a strong community

To bring back The Losar in its grandest festivity!

Else there might come a time, when Losar will only be described in stories,

And shall remain buried forever, with hardly few memories.

It is not just a formality of one day,

Or an opportunity of getting entertained in any way.

An amalgamation of two Tibetan words, for inference,

Losar has its own religious and spiritual importance.

And the real value of one’s heritage,

Is only realized by a person at a later stage !

But by that time, it is often too late,

We can decide together, to let Losar not meet that fate.

For a week, why can’t we celebrate as one big family?

As a community, maybe we can gather around happily

And get closer to each other,

It will help us know one another better.

Right now, I am worried for my people, and also my traditional values,

But shall pray that this Losar, we see changes with some good news.

Till then, wishing each and everyone very happy & prosperous Losar,

Paddri Anthem: A Poem by Ash