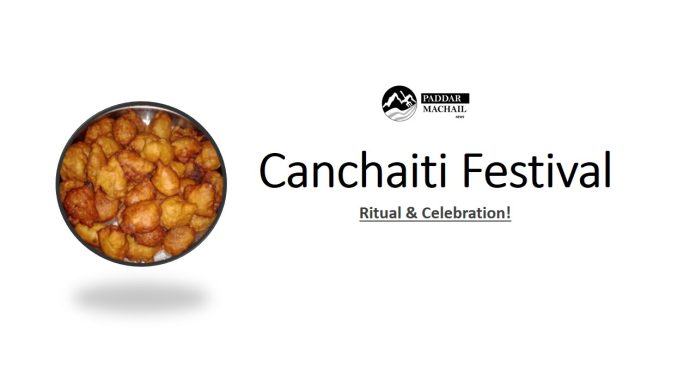 Paddar is celebrating Canchaiti festival from today. This celebration will go on for 4 days. Each day has its distinct name and ritual attached to it. People cook different delicacies for the occasion viz. Badas, luchis etc.

The festival is dedicated to Lord Shiva and Maa Parvati! This festival is celebrated in all across the Paddar-Pangi-Bhaderwah region.

The four days are named as:

This festival literally starts on day called Jhazoo in local dialect. People on this day clean their houses and preparations start for the ritual of marrying Lord Shiva with his consort Maa Parvati! Some people start cooking badas on this occasion.

Children in villages all across Paddar go door to door and ask for THANJHANJER. Thanjhanjer is a portmanteau of two-three words. Villagers give them walnuts, grains and other edible things. They eat the stuff later with great excitement.

Houses today fill with the whiff of different kinds of delicious meals. At the end they relish on the meals.

Newlywed women choose a man called GAURRAT for life and on this day (they fast) for the ceremony and invite him for the dinner. Idol of Maa Parvati (Garzaa) is constructed out of clay and is decorated with the attire usually donned by the bride.

Garzaa is anologous to Girija which in turn translates to “The daughter of Mountains” an epithet of Goddess Parvati!

Picture of Garza decorated in Paddar!

Gaurrat plays a crucial role in this festival. Every women after marriage assigns this role to a young man from the husbands clan. He performs many functions.

From adorning idols of Maa Parvati to carrying it the next day towards a nearby brook, all is taken care of by him.

It is the last day of this festival. On this day, Gaurrat chose by women take or say accompany the idol of Maa Parvati and immerse it in the nearby brook.

Thereafter dance takes place of different Gaurrats in an open place in circles, amidst the sounds of local dhols and jangling of plates and ladles.

People get together is usual during this festival which adds colour to this winter season. Finally this festival culminates with the journey of Gaurrats back home.

It is also said in some cultures that women fast during this festival for the longevity of their husbands.

This festival holds great importance in our culture. Many other legends are associated with it. If you liked this write-up, please share it with your friends.

You can also add more to it by sending information concerning this on our emails or by simply texting us on our WhatsApp numbers. 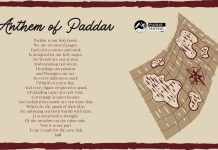 Paddri Anthem: A Poem by Ash