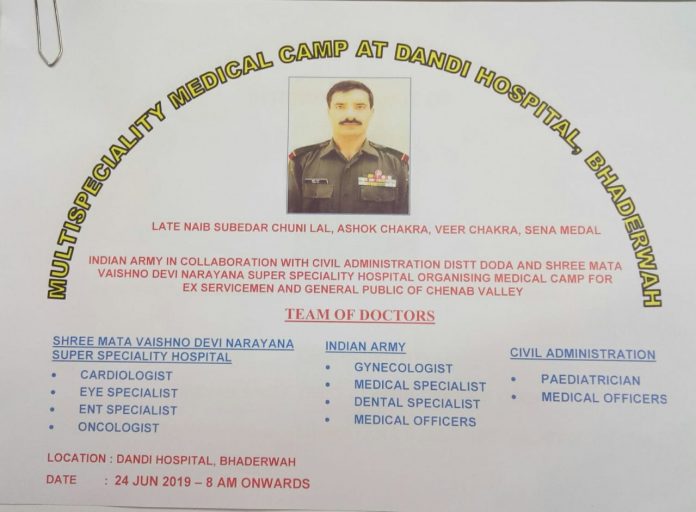 MARTYR NAIB SUBEDAR CHUNI LAL AC, VC, SM was born in a remote village Muthal , Gandhari, Paddar Tehsil Atholi, Dist.Kishtwar (J&K). A son of sh. Shankar Dass of village Muthal and Smt. Dunkhari Devi of village Bhatwas, of Gandhari, Paddar. Born in the family of pujarian (Pujari of Mata Chandi seated in Chag,Gandhari) had the blessing of Mata Chandi, he attained supreme martyrdom unto the service of his motherland. The family of the brave soldier had shifted in sixties to Bhaderwah and settled in a village Bhara presently in Bhalla Tehsil (Bhaderwah) of district Doda. The eldest son of the family, he had two younger brothers and four younger sisters behind.

Born on 6th  of March, 1968 in village Muthal, Gandhari, Paddar. Late Naib Subedar Chuni Lal was a brave and courageous. He is highly decorated soldiers in Indian Army honoured with Sena Medal, Vir Chakra, and India’s highest peace time gallantry awards the Ashok Chakra (POS). He succumbed to the war inflicted injuries on 24th of June, 2007.

The print media of India gave wider coverage through major Headlines on NAIB SUBEDAR CHUNI LAL and his prime sacrifice, some of which are as under:

1.  The Siachen Hero succumbs to the injuries-The National Herald(26-06-2007)
2.  Siachen hero falls to militants bullets – the Indian Express.( 26-06-2007)
3.  He was a real hero, in life and death- Hindustan Times (26-06-2007)
4. Jawan kills five terrorists before succumbing – The Times of India (27-06-2007)
5. Highly decorated JCO dies in Kupwara- Kashmir Times
6. Vir Chakra winner dies hero’s death- The Pioneer (27-06-2007)
All the leading news papers of India and state printed the bravery of the naib subedar Chuni Lal who was promoted as JCO (Junior Commissioned Officer”) in the last days of his life. But the destiny has bigger reward for the son of mother india than the badge of honour received on promotion. 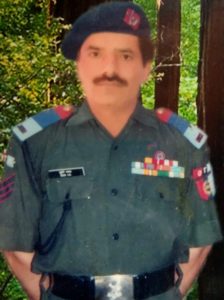 Late JCO joined the Indian army in 30 November, 1985 and was directed to report EIGHT JAMMU AND KASHMIR LIGHT INFANTORY (8JAKLI) for service and served till 24th June 2007. In his services the gallant soldier volunteered for and played a crucial role in capturing the famous post ‘BANA POST’ (21153 FTS) in Siachen Glacier, the highest battle field in the world. For this act of gallant, he was awarded ‘Sena Medal’ in the year 1987. 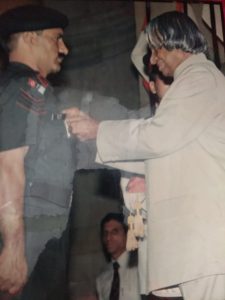 He once again became an example to emulate , when in the year 1999 while serving with his unit in the Poonch sector in the ‘OPERATION RAKSHAK’ he fought an attempted intrusion by Pak Army and was instrumental in beating back the attack, killed 12 Pak soldiers in the operation. He was awarded ‘VIR CHAKRA’ for the act of gallantry.

An asset to the organization, he represented INDIAN ARMY twice as UN PEACE KEEPER in Somalia and Sudan during 1992 and 2006 respectively. He again displayed his utility and unflinching devotion to his duty while serving in the difficult operation of Sudan as a peace keeper. He was at the fore front in the Malakal crisis in Sudan for which the battalion was awarded ‘ UN UNIT CITATION’ for valour. He excelled professionally as well and also did instructor tenure at NCC, OTA, Kamptee, Nagpur , Maharashtra.
JCO Chuni Lal is survived by his wife, a son and two daughters. Now his son Manveer Singh has also joined Indian Army.

On 24 June 2007 JCO Chuni Lal in a fierce gun fighting with militants in the Keran sector of Kupwara attained martyrdom. According to the reports received, the troops of the JAMMU & KASHMIR LIGHT INFANTORY (JAKLI) battalion observed some suspicious movements near the line of control (LOC) where the said battalion was posted during the intervening night of June 23/24 in the Keran sector of Kupwara district in Kashmir.
However, due to low clouds and poor visibility the movement of terrorists could not be tracked very effectively at night. Consequently, a search party led by Naib Sub Chuni Lal set out in the morning hours of Sunday to ascertain the facts. The JCO led his troops from the front though with caution. The troops fired upon by a group of terrorists hiding near the LOC to which they retaliated immediately with heavy volume of fire.
The young but battle hardened JCO maneuvered his troops to block all escape routes of the terrorists which led to the elimination of two fleeing militants at the outset and the remaining terrorists finding themselves surrounded by the troop opened fires on soldier. On spotting terrorists hiding behind boulders, he closed in and shot him at close range other terrorists opened fire and injured two soldiers. Sensing criticality of the situation and threat to the lives of his fellow soldiers Naib sub Chuni Lal with total disregard to personal safety charged at the terrorists. This act of daredevilry took the remaining three terrorists by total surprise.
The JCO though wounded and profusely bleeding continued to fire at the terrorists till all the remaining three terrorists were killed. Naib sub Chuni Lal later succumbed to injuries.
The act of bravery, leadership and sacrifice by naib sub Chuni Lal not only resulted in the elimination of five Pak trained terrorists but also saved the lives of the fellow soldiers under his command. For this gallant act and most conspicuous display of bravery naib sub Chuni Lal Vr C, SM was awarded posthumously the highest peace time gallantry award ‘ASHOK CHAKRA’ on 61st Independence day. 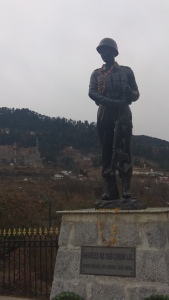 To remember the saga of supreme sacrifice, extraordinary valour and bravery and unflinching patriotism of the soldier a statue is raised at Fish Pond-cum- lake view resort , Gatha, Bhaderwah developed by J&K Tourism.To commemorate this unmatched heroism 25th of June is celebrated as ‘SHAHIDI DIWAS’ in Bhaderwah. 24th of June is also celebrated as ‘SHAHIDI DIWAS’ in his native village BHARA(KILLAR). In this village there is a ‘SHAHIDI PARK’ named in the memory of war legend. He is also called ‘HERO OF BHADERWAH’. 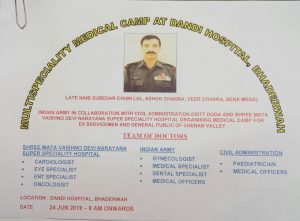