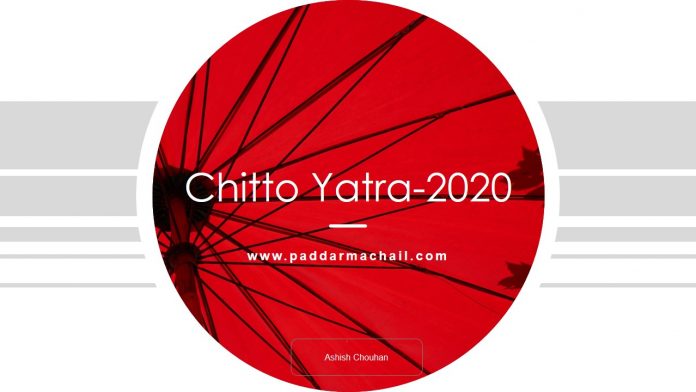 Paddar is also called “Devbhoomi” (An abode of gods) because there are many deified places in Paddar which increase the prominence of land. To every such mystical and holy place there is a pious tradition of taking pilgrimages so that devotees and people of Paddar shall always remain under the prosperous blessings of these Gods and Goddesses.  Beginning with Machail Yatra which has made Paddar famous worldwide, there are many other such pilgrimages like Chitto Yatra, Shivdham Yatra, Hagyoth Yatra, Panji Dhar Yatra and Mindhal Yatra which has enriched and are still enriching the holy atmosphere of Devbhoomi with the scent of devotion. After Machail Yatra which started gaining eminence after 1987, Chitto Yatra is the second oldest yatra which made its name in the religious fabric of Paddar. Today, thousands of devotees pay obeisance at the sacred feet of Singhasan Mata, the prime deity of Chitto Paddar, every year. Now it is growing rapidly like never before but what makes people attract to this pious place and why, is something interesting and which I think we all need to know. Here is a legend:

It is said that Maa Singhasan appeared in the form of Pindi for the first time in the house of one lady called Zyus Dai, whose husband was from a place called Churah in Himachal Pradesh but had settled permanently in Chitto to live his family life. When the lady saw that steep stone (Shekh Fatt) coming out of the earth she became anxious about her house and family. One night in her deep sleep she had a dream. In the dream Maa told Zyus Dai that it was She who was coming in her home in the form of that stone and asked her whether she was happy with that or not. Upset lady made a sorry note of that and asked Maa humbly to change the place of her presence. Maa understood her problem and directed her to make a temple at the place in Chitto from where a long tower of dense sacred smoke would emanate the next morning.  She accepted Maa’s command and consecrated the place next morning in the presence of villagers. Since then Maa is protecting and doing good to the place, people believe.

There are many stories of miracles that Maa has performed and which has made Chitto a place of great interest.  Some stories are intriguing and surprising at the same time. Here are some:

Temple is situated there at the place where it was consecrated in the past and Mata (a living entity) is still residing there under the curtain in full majesty inside the temple. There are many stories of Singhasan Mata which are capturing the attention of masses. Out of that, there are some stories which are popular and mind bending. Here are these:

Here is a concise note on each of these stories.

Man who lost his eyesight:

It is believed that Singhasan Mata is living behind the drape therefore no one is allowed to peek inside the fragile but iron wall of myth in any case. But if one does so in case by going against the set rule, one would lose his/her eye sight for entire life, people believe. Once a man who was a Patwari from Chamba visited this village for some official work when Paddar was a small administrative unit of Himachal Pradesh. After listening about the myth of curtain he showed curiosity of watching behind it. Villagers tried their best to stop him but he didn’t listen to any of them and went inside the temple. He pushed the curtain to the side and peeked in oddity. All of a sudden a flash of light hit his eyes which took the light of his eyes for the rest of his life, people say. It was that day when the faith in this myth was again reposed with thunderbolt intensity. Even today, people do not take the risk of touching that curtain. Except Pujari, entry is restricted to hoi polloi.

Legend of Tatta Pani is also connected with this historic village of Paddar. Do read and know how Shaish Naga failed in negotiating with Singhasan Mata for a piece of land and know why he left the place and went to another village.

The guiding rainbow of Paddar:

There came a time in the village of Chitto when it was hit hard by the problem of water scarcity and drought like situation. People went whole hog about solving that problem but failed every time they tried. When no strategy worked in their favour they devoted all of their energy in prayers and bowed at the sacred feet of Mata to seek solution from the divine being. To their rescue, Mata became the voice of one ardent devotee and said that after the heavy rainfall of next morning She shall appear in the form of a rainbow which would decide the path for them. All they have to do is to follow the path of that rainbow and construct a small water canal which would cater to all of their demands, Mata said in the frightening roar, people say. Villagers followed the command the very next day and their problem was solved once and for all.

Story of the mythical Court of marriage:

Durbar of Mata is no ordinary. In the ancient times and even in the recent past it acted like a court of marriage for couples who rebelled against the society to find their true love. In short you can say that Singhasan Mata is a great supporter of love marriage  . Whenever the parents of eloped couples refused to accept the alliance, they suffered heavily. Nobody dared challenging the rule of Singhasan Mata. Even today, lovers go there to seek the blessings from the divinity for the success of their desired married life.

The legendary statement of Paddri Chela:

Once a mukhya chela (an ardent devotee) of Maa Khattar Mitti (Mata who took birth from the Earth) said something legendary in the 19th century which became history in the time to come. His name was Thakar Chand. One day while performing pooja in the temple in his typical deified dance he said by becoming the voice of Mata a significant statement in Paddri , I quote “Pahar Panjab Ek Bhway Ghyana” unquote, which means mountain of Paddar and plains of Punjab will become one in the times to come. Nowadays people give different meanings to this statement. Last year when electricity reached at the doorsteps of villagers in Chitto, people started repeating the above statement in joy claiming that truly mountains and plains have become one in terms of development.

Watch this interview of Mukhya Pujari of Singhasan Mata, Chitto Paddar. Here is a link of the vedio and listen what he has to say:

Start of the Chitto Mata Yatra

Usually this yatra starts from 7th or 8th of July every year. But this year (2020)
due to COVID-19 Pandemic it will start or not, no official statement has been issue in this regard. It is highly advised that people should avoid mass religious gatherings.

Though not confirmed but it is likely that Holy Chadi Yatra of Singhasan Mata will commence this year.

It will commence from 7th of July as usual if it will. From Chishoti this Yatra will head towards Chitto. On the way it will stop at Leondi for rest on the 7th of July. Next day its second halt would be at Sohal Paddar for a overnight stay there and then after night long bhajan kirtan (jagrata) Chadi Yatra shall reach Chitto with its full splendour. Yatras are taken to Chitto from a number of places in Jammu also.

There is also a legend behind the start of Chitto Yatra. Here it is:

It is said that in-between 1991-92, wife of Sh.Thakur Chand ji of Chishoti Paddar fell ill. He was an employee in J&k Police so he gave his best to treat his wife in various hospitals. But to his dismay nothing cured his wife. Finally, one day he had a dream, it is said, in which Singhasan Mata told him that if he really wanted to see his wife kicking and alive he must bring yatra to Her darbar every year. Thakur Chand accepted this charge whole heartedly. He gave up his job and started this famous Yatra in 1994. Ever since, this Yatra is continuing successfully. In 2010, it got registered and its responsibility of maintenance was given to a body called “ Singhasan Mata Sevak Sanstha”. Now this body caters to all the demands of devotees every year. It is hoped that this Yatra will also become as big as Machail Yatra one day.

Pilgrims often find solace in pilgrimages, especially in those which are hard to reach.  Chitto  Yatra is one such. Singhasan Mata is believed to be a fusion of 9 great powers. People visit this shrine with great reverence. In addition to that, Chitto also is a very beautiful village with multitude of spectacular sceneries. It is a village of myths and stories. One must visit this legendary place to seek the blessings of Maa Bhoodati (Earth Goddess) for a happy and prosperous life.

I hope you liked this post on Chitto Mata. We will keep you updated all the time. Please share the post to your friends and yes don’t forget to pass your value-able suggestions. Your support is our oxygen. So keep supporting by sharing this post. Thank you.

A poem on the beauty of Paddar!

A poem for those who dare to dream

A Poem on ST status for Paddar