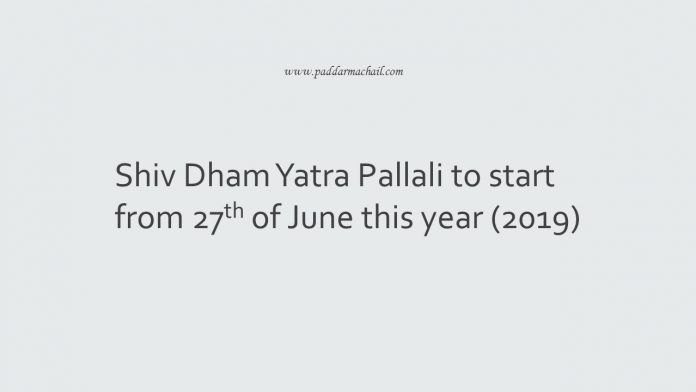 Shiv Dham Yatra to Pallali Paddar is about to begin from 27th of June this year. Like Machail Yatra and Chitto Yatra this Yatra is also gaining eminence in our state. It has been said that Shiva and Shakti, both living entities are present in the village. Along with this one can get a spectacle of mighty peaks from the village and during this pilgrimage natural aura of the season strikes a cord within the pilgrims. Shiv Shakti Sevak Sanstha is the management body which handles the affairs of this yatra. It will start from three places this year.

Places from where the Shobha Yatra shall begin:

This Year in 2019 it will commence from two more places other than Paddar. Wednesday on 26th of June Shobha Yatra shall step on from the houses of Sh. Bal Krishan Baloria of Balesa village and Sh Pawan Sharma of Janipur Jammu. On 27th of June, another Shobha Yatra will head toward Pallali under the guidance of Sh. Gurudev Dhanmantri Giri.

Shedule of the Yatra:

Yatras from Balesa village and Janipur Jammu will halt at Huryangwari village of Paddar for rest on 26th of June. On 27th of June all the three Yatras will begin their journey toward Pallali Paddar at sharp 10 ‘O’ clock in the morning. That night they will stop for their second halt at Hako Village in the temple of Myoo Naag. After nightlong jagrata and bhajan kirtan this yatra shall finally head toward the village of Pallali Paddar for Darshan on 29th of June where grand temple of Lord Shiva is situated. Afterwards, on 30th it will come back to the village called Huryangwari.

Well I must start with the introduction of who laid the foundation of this divine dham. A Baba namely Dhanvantar Giri jee Maharaj from Basholi jammu first time visited this place and experienced the divinity of this place,  built the temple and brought this serene place into limelight. This temple between village Pallali and Baintha in Panchayat Pallali is one of the most beautiful temples you will get to see in paddar.

Structure of the Lord Shiva Temple:

The temple is fortified by big wall with intricate carving and very high dome is visible. Nice carvings carved out of wood with sculptures of Lord Shiva and other gods and goddesses on the temple walls, very beautiful to look at.

Once you enter this abode of Shiva you will feel the serene silence and will automatically and without your knowledge you will go to silent prayer for some time. Darshan of Lord Shiva underneath a big stone. Apart of this, the whole panchayat is a place where ancestral life in the villages is preserved. We can see the pleasures of a rustic life – the cowherds & shepherds playing in the meadows, various craftsmen at work, typical village homes, fairs, panchayats etc. If this is the life for the past couple of centuries, there are also depictions of our glorious ancestors from the Vedic & later ages which is for you to explore my friends. The road journey in itself is mesmerizing as the road is traced to the one side of sapphire like blue Chenab river. There are local volunteers to help out in time of need. No hoardings by pandits or beggars. It’s only few kms from Gulab Garh. Annually, thousands of pilgrims pay visit to the place to seek blessings of Bholey Baba. Infact, the number of pilgrims with each passing year has kept on increasing manifolds.

Last words from the Author:

There is no doubt, you will enjoy the pilgrimage all along. But before you start this Yatra don’t forget to keep all the necessary items with yourself. Those who have visited this mysterious place often compare this to Kailash. It is also an abode of Lord Shiva. Munificence of all the loved items of our Lord will keep you high in the devotion all along the journey. Charming scenery of the place, cold waters of the brooks and lofty peaks of our land-The Sapphire Land will keep you engaged so much that you will feel like you are experiencing Time Travel.