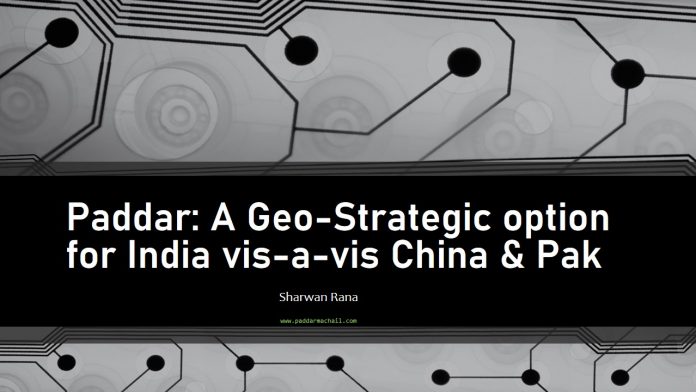 The geographic position of Paddar has often been used in relation to describe it as potential tourist destination, scenic beauty, abode of Mata Chandi, sapphire land and so on. But the most important geographical disposition of Paddar in contemporary time often overlooked is its geo-strategic location viz-a-viz Pakistan and China; both are imminent threat to the unity and integrity of India. Whilst Pakistan is eyeing Kashmir China always perceives India as its prime enemy and stakes claim on Major geographical area in Ladakh and North-east India. Both China and Pakistan have made their attempts in the past to enter Indian Territory and occupy Indian regions in Ladakh and have occupied major portions during invasion by Pak tribal in 1947 that include 78,114 sq.km and 37,555 sq.km of areas Jammu and Kashmir respectively by Pakistan and China and 5,180 sq. km handed over by Pakistan to China. Besides tactical moves attempts have been made with talks and negotiation. In 1963 Pakistan even caused his stake on major portion of Ladakh, as Indus river flows through Ladakh, in guise of Indus Water Treaty.

Pakistan, being consistent in its policy of proxy war against India, finds its syncretic ally in China, both poses persistent strategic challenge to India in their bid to gain powerful position in Asia. Malicious design of China to further its pursuit of strategic advantages in Ladakh region of India should not be misconstrued by what china professes superficially which is envisaged under Panchsheel Sidhant of peaceful coexistence with neighbours.

Click to know about the beautiful waterfalls of Paddar.

India must be prepared to defend its territory against Chinese aggression in the north and north-east and Pakistan’s proxies in the west. China has constructed Karakoram Highway which starts from Kashgarin Sinkiang and ends at Hasanabad in Punjab, Pakistan.

Given the typical and harsh weather condition of Ladakh which varies from arid to semi-arid land masses, perpetual snow laden mountain peaks, drained by perennial rivers viz. Indus, Suru etc. and spotted with some of the world’s largest extra polar glaciers viz. Siachen, Biafo, Saltoro, Rakaposhi, Nubra, Hispar, Baltoro, etc., the vast and sparsely populated region is the most difficult place on earth to secure strategically from its vicious neighboring enemies.

The strategic thinkers in India see China to be the major future threat to India.  In such scenario military and strategic preparedness of India assumes prime importance and need utmost primacy in its strategic policy.

Paddar has been geographically circumvented by Himachal Pradesh and Pangi to be more specific in the east, Zanskar of Ladakh Plateau in the north and Dachan-Marwah-Warwan of District Kishtwar towards the West to north-west.

An all-weather defense road got constructed in view of its strategic roadmap during 1980’s by India which connects Jammu & Kashmir to Himachal Pradesh via Paddar (J&K) and Pangi (HP), both are having geographical proximities with Ladakh.

The Pangi valley of Himachal Pradesh remains cut off from rest of the State of Himachal Pradesh for 4 to 6 months during winter; this road serves as life line for people living in Paddar and Pangi alike, besides catering to the defense needs of nation. To comprehend its strategic needs this is half-the-task done.

Poem on CoronaVirus and Palghar Incident

There are three most probable points in this region of Paddar and Pangi which connects to the Suru valley:

Though, this track has never been used in any historic military conquest. However, is frequented by local inhabitant living across the mountain range through mountain pass called Kaagjout. The name “kaag jout” is derived from local dialect KAAG which means crow (since, this mountain pass resembles with the shape of a sitting crow) and JOUT means pass in local dialect.

This pass has been used in past by bovine smugglers as they found this track feasible for bovine to cross over safely. During 80’s and 90’s villagers have also foiled such attempts made by the bovine smugglers.

2.ALONG SURAL DARYA (HP) via Shivshankjout:

3.ALONG BHOT NALLAH FROM DARLANG DHAR via Umasi La:

Of these three probable points the third one has been frequently used in past during military conquest and war defense whereas, the former two have never been utilized. This is as such strategically most viable and significant track among these three tracks. As a counter sustainable strategic move the construction of this stretch of road becomes even more imperative on the part of India.

Dotted line depicts Track of Zorawar Singh during his Ladakh expedition and also during war with China and Pakistan.

Historical significance of this track:-

The local porters who assisted Indian forces to scale the height of snow bound mountain ranges which form water shed between the Ladakh plateau and Paddar valley have narrated the harshness of the terrain and my grandfather along with many of his contemporary villagers were the eye witness to these adversaries in 1947 and 1962 wars. Much time has passed so as the tactical preparedness of the enemies nations have made multitudes of advancement in these years; India must exploit these strategic positions and strengthen its geo-physical war measures.

Economic significance of this track:-

Besides historical significance right from the landmark expedition of Gen. Zorawar Singh in 1836-42 to COL. Yadav triumph in 1947-48 this track is much sought for the world most unique and bountiful high land meadows, posture land and mountain tracks. This track has many tourist attractions such as alpine vegetation and herbs, natural fresh water lakes viz. Buzuno Lake, Barnaz Lake and many floral valleys. This track hold key to the world’s most exquisite high land alpine pasture land such as Dharlang, Buznou, Buzas, Sumcham. The mountain ranges and highly adorned peaks falling on this track are Buzuno Peak, Trishanku peak, Brahma peak (highest peak in Paddar), Aghayasol peak, Mahadev peak and Umasi peak.

This area has the potential to become the most sought after tourist destination for the mountaineer and travellers and nature lovers. The development of this track with modern amenities will offers an alternate pass apart from Zoji La.

This road will be boon to the life of inhabitants along the road and nearby villages. It will open new economic and employment opportunities. The tourist circuit of Paddar may even extend to Ladakh and Himachal Pradesh via Upsi La. The trackers can ride from Upsi La to Paddar, Kishtwar and ultimately to the plains of Punjab.

Another important and distinguished attraction of this track to the tourist and trackers will be the presence of world’s most famous blue sapphire, abundance of natural herbs, shrubs and medicinal plants. Nevertheless, Paddar has been emerging as a preferred tourist destination especially during past three to four decades with the blessing of Mata Chandi seated at Machail.

Cultural  significance of this track:-

A major part of population of this area has been immigrated from Ladakh and Zanskar via this track along with their language and customs and religious faith. They introduced tibeto-mongoloid race in Paddar and they profess Buddhism. They remained connected to the place of their origin thanks to the easy accessibility of this track since the time of Zanskar principality which ruled from Padum to Paddar.

I hope this write-up struck a chord in you. If you want to support our team please share it with as many friends as possible. Your support is our oxygen. Thank You.