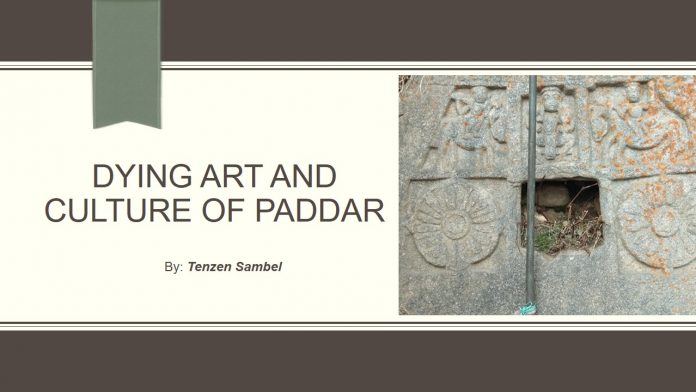 The Paddar valley lying in the north  of Kishtwar  range in the Greater Himalayas, located in the Union Territory of Jammu and Kashmir was traditionally very rich. In fact, every micro region of the valley was richly endowed with its unique traditions. Whether it be performing arts or woodworks, metal casting or dying, handicraft or embroidery, the range was varied and most forms had a highly developed theoretical basis. They were also living traditions which became a way of life for those involved .These traditions were not just a performance, but the individual’s entire life and livelihood revolved around these traditions.

Once” Majnu Bhai”  a local farmer from Paddar approached the then Maharaja Partap Singh of Jammu and Kashmir in his  royal court to request the king for exemption from Ghaascharai  tax, a local tax paid during that time for cattle grazing. The Maharaja wanted to know about their hard life from Majnu Bhai. When Majnu Bhai explained about daily life and hardships of inhabitants of Paddar , the Maharaja was so surprised about their hard life and asked how they managed their livelihood. He asked how many people are here in Paddar, the answer was 500. Then he asked how many people are  labourers,  and the answer was again 500.When asked about how many are  cobblers, the answer was surprisingly again 500.When the Maharaja wanted to know about  the total number of tailors, the answer was again 500 and so on . It means Paddris  ( inhabitants of Paddar) were experts in every fields of arts and crafts and managed  their livelihood from local traditional technologies.  The Maharaja was so pleased with the answer given by Majnu Bhai and the Maharaja exempted the said tax of Ghaascharai.

But the slowly changing modes of life and introduction of new technologies over generations altered every aspects of the artisanal mode of life beyond recognition. The current forms of economy, increasing needs and complex life styles are leaving very little space for these cultural forms to coexist. As a result, each passing moment is seeing the death of these age old arts. As parents encourage their children to study and not follow the family traditions, there is a gradual and imperceptible movement towards the obliteration of these heritages which may remain only as museum pieces in future.

The traditional flour mills commonly called as Ghiraats ( Rantak or Randak in local Buddhist dialect) which once  seen in every villages of Paddar are now remained only in dilapidated conditions. In olden days, they were the source of grinding grains like wheat, Maize, Barley, Kodra etc. But with the advent of modernity, flours and other grains are being purchased directly from shops and as a result these Ghiraats are left without any care and are now on the verge of being completely lost forever. These Ghiraats  are so designed that shows a perfect example of scientific skills. The importance of these Ghiraats are many folds. They are eco-friendly and   purely run on water, Pollution free and economic. And the flours so grinded in these flour mills have natural taste and fibrous. They were once the source of income for the owners who run these Ghiraats. But during last few decades, machines replace human skills and artistry and the artists themselves become construction labourers.

Fading colours of Naoun (Source of drinking water and Water reservoirs made of stones) mostly seen in areas of water sources in every corners of Paddar are perfect example of ancient art and architecture. These Naouns were perhaps built with the purpose to conserve drinking water sources. They were built in the memory of some high profiles after their death. On close observation it can be seen that the traditions were carried out by the same art and artists. Work carried out by the artists in designing these Naouns is so stunning and stone carving done to produce these structures are still remained as mystery in the eyes of historians. Through these magnificent structures, one can understand how our ancestors conserve drinking water sources. But in the recent days due to developmental works, these invaluable structures have been ruined without knowing their past history and values. The tradition of these arts is no longer followed here in Paddar by their caretakers without knowing their values and importance. No one even knows who had constructed these Naouns. Only stories are now being told about these Naouns by some elderly persons. The designs of these structures and figures carved on the walls and beams are conveying strong messages of the epic like The Ramayna and the Mahabarta or some Mythological gods and goddesses.

Paddar valley is also home to the rich but slowly dying traditional customs, rituals and arts. One such dying tradition is the famous Gurie dance performed by a group of dancers during every special occasions. A Gurie team generally comprises of 10 to 20 dancers and singers who sing in chorus and dance in circular form with colourful dresses. Rich and colourful costumes add charm to Gurie dance which make a lively presentation of stories from legends or some past incidents and even dramatic scenes from actual life etc .But these colourful and attractive dance forms which were once source of entertainment during past days during special occasions are only seen in schools during Independence day and Republic day celebrations only. The traditional attires which were used during these special occasions are now only seen as show pieces. It is only the passion of few individuals that has kept the art form alive, as individual artists  hardly  get anything in today`s world due to  mostly dependent on modern technology and machines rather than on traditional ones.

Another example is the famous Musaade, a musical show performed by local musicians in olden days is now hardly known to new generations. In fact Musaade has its origin in the Chamba district of Himachal Pradesh but some believes it as a folk song of Jammu region .A Musaade  team generally consists of a couple who carry various musical instruments like Sitar, Tabla etc.  They roam from street to street and from village to village singing melodious songs in local dialects which make a  lively presentations of stories from historical episodes, epics and mythologies and earn their livelihood.

The week long famous Losar festival in Buddhist villages which is celebrated to mark the beginning of  new year starts with the Prayers and chants with hoisting of prayer flags, decoration of houses and Gompas has now reduced to single day as per choices and convenience. All the rituals performed during Losar are now remained only in words and have no practical value in real life. Traditional attires which were once used to wear during these special occasions are not remained in pictures.

In Paddar valley, art is a way of life and everyone here is an artist practising one or more  art forms like wood carving, wool rearing, spinning, weaving , stone sculpture etc. Everyone here used to be busy in artistic creation throughout the year. Local shoes made of Paddy, wheat or barley grasses commonly known as Poola and local grass mats known as Mander were mostly seen in every houses are now remained only as strange names to younger generations. These traditional mats and shoes are now replaced by plastic, nylon and other harmful materials. These century old crafts that involve   interweaving of wheat or rice straws to provide warmth in winter and cooling effect in summers are now becoming extinct and having these traditional carpets and shoes in homes is a pipe dream. The introduction of modern decors like wall –to- wall, imported carpets and rugs has made these traditional carpets completely out of fashion. Their extinction has not only impacted our traditional way of décor but has impacted our health as well. Sleeping on them and wearing these shoes can help incurring backaches and provide natural pain relief. They are said to increase blood flow, release muscle tension, clear away toxins and promote relaxation and healing.

Use of stone pots commonly known as Duggal and Batdi ( Dolthok in local Buddhist dialect) were once   common in every household. These famous art forms  of Paddar has now become vogue in the eyes of all . Food cooked in these traditional vessels is enriched with the minerals of the respective stones. They are safer than modern cookware made of steel and plastics. They not only make our meal tasty but they have an ayurvedic and therapeutic advantages also. Spinning of wool and weaving of local blankets, colourful murals, carvings, sculptures on doors and windows have also been replaced by artificial paints and readymade ply woods.

With the dying tradition, we are loosing our identity and we are not in a position to tell the stories about our culture and heritages which our forefathers left for us .Realising  the importance of our heritage, we all should try to recreate our past glory by bringing Paddar valley on tourism map. Each and everyone should come forward to make Paddar a tourist friendly place. Government should help local artists to promote local arts and culture. However, it would be wrong to depend completely on government but all art lover in every field should come forward and extend their hands in promoting the declining arts, customs and rituals. But who will take this huge responsibility is still unsure.