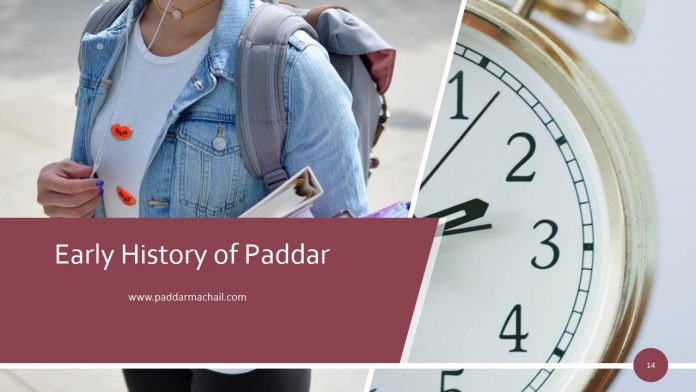 Paddar, which today is popularly known by the name “The land of Sapphire”, is a tiny subdivision of Kishtwar District of the newly created UT, J&K. Nestled in the lap of lesser Himalayas and surrounded by the tall snow-capped mountains from all sides this region of the planet which remained unknown to the rest of the world for many centuries was brought to glory in the 1880s and 1980s by the discovery of world famous Sapphire Mines and with the commencement of famous Machail Yatra respectively. This region which remained isolated for centuries has its own unique culture and history.

Though no concrete data is available about the early history of Paddar, but there are some records, forlorn stone fountains and early sculptures which suggest that this land was traversed if not inhabited by the people many centuries ago.

Geologically it can be speculated that this tract of land especially area in the vicinity of the today’s financial Capital of Paddar, Gulabgarh, was part of a lake thousands of years ago formed by the confluence of mighty river Chenab and its tributary Bhotnallah which originates in Paddar. With the time this land of sand to a depth of about 10-12 feet would have been formed. For years this region remained untouched from the human activity. Situated in the lap of Himalayas this region is rich in flora and fauna.

Meadows in Paddar are widely known to this date for its rich juicy grass. These meadows would have certainly allured cattle grazers from the surrounding areas to this land and which would have finally paved way for the inhabitation of the area in the later years. Pointing exact dates of such dwellings are unfeasible but it can be said that this all would have happened between 6 th and 8 th centuries CE.

To the west there lies Nagseni, an area about 30 km away from Paddar, history of which dates back to around 200-300 BC. One of the Great Buddhist Monks Nagsen who wrote book Milindapanho was born there. Carving roads through the Himalayan Mountains especially Paddar would have been truly a daunting task but should it not be questioned that how an area which was only at a 30 km distance from an inhabited place remained uninhabited for years on end.

Legends tell that stone fountains, popularly known as naurn in Paddar were built by Pandavas. Same structures can be found scattered in many areas neighbouring Paddar viz. Pangi, Bhaderwah and Nagseni. It is true that these structures are centuries old and are a matter of research but calling these to the time of Mahabharata would not be sound as we have no data to justify this claim.