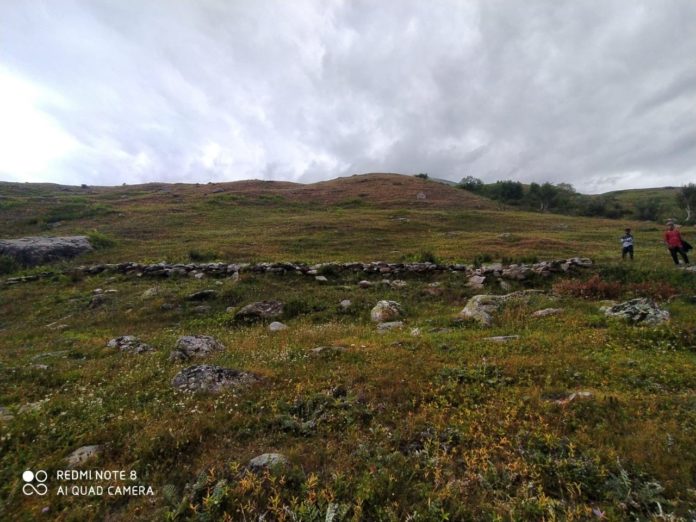 Mountains are calling and to those who listen these mountains become harbinger of complete solace and eternal peace for them. Since ages mountains have become home to seers and saints who end up here for meditation and exploring the ultimate truth about life and death, spirit and soul, existence and end of universe etc.
Besides skyscraping peaks, water abounds and fresh cool air these areas also offer from a handful of local cuisine to a myriad of wild and exotic foods to portrayal of unique yet fascinating cultural heritage. Here are some excerpts from my travel diary of trip of Paddar.

In this trip of Paddar I got the privilege to see Naghui festival after a long time. It is considered as the biggest gala show of summer in the valley. It is celebrated on sankrant When the shepherds ( village men) along with their cattle descend to their homes from higher reaches which these village men call Dhaar. Since they return home after one month on this day of sankrant . So this festival, which last for three days, is celebrated as sankrant Mela where they offer their tribute to Mata Chandi and other Kuldevta.
  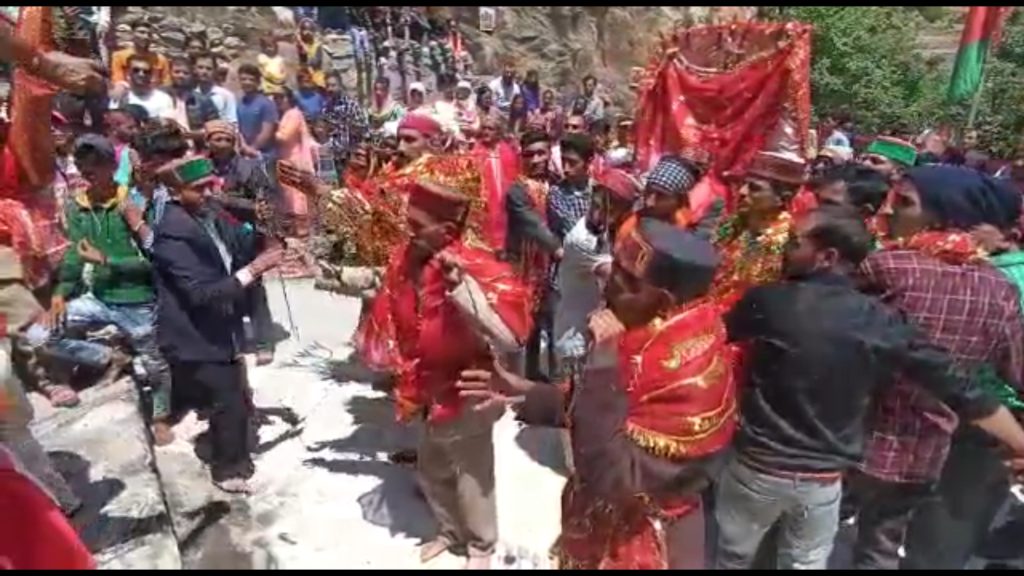 As a matter of finding facts or story behind the festival I asked many village men particularly veterans and old folk about Naghoi and as to what Naghoi literally means. Ironically there was no one to help us decipher the term Naghoi. Now the questions are still there.

What does term Naghoi refers to?
How it came to be called so?
Why this festival is celebrated? and so on.

When I further enquired about the festival, one elderly person narrated an incident that took place in distant past on the eve of this sankrant Mela.
Here it is what happened:

There were few fixed precedents that were followed during the festival. Since, this is pious for it is the culmination of pious month of Shrawn. It is said that Mata Chandi return from her maternal home after one month and everyone including Devtas wants to pay obeisance and offer tribute to Mata. Since, Devtas are there in queue, certainly there was set order of precedence that who will first offer their tributes.

Click for the Article: Paddar-A viable Geo-strategic Option for India

Devtas are in queue sounds amazing. When in a fit of anger Sati immolates her sacred body parts fall at different places. Every such place becomes Shakti Peeth and are revered ever since. Mata Chandi is considered as personification of Shakti(Sati)of Shiv (Mahadev).

In the order of precedence Nag Devta assumes the first place, Varun Devta second place  by and followed by other devotees. On one such occasion this precedence was not adhered by the procession representing Varun Devta and entered the sanctum sanctorum of Mata Chandi Temple. Nag Devta felt insulted and under rage tore the earth and appeared on the spot with mouth full of blood. CHELAs  narrated the conversation between Nag Devta and Mata with former exhorting the Mata Chandi of unhappening and unprecedented . The veterans further added that “bhagat kay bas Mai hai bhagwan” , in our local parlance we call  “Mata tope haar gai ( means  Mata lost the Crown)” to save the other devotees from the wrath of Nag Devta’s curse . It is said that Nag Devta cursed huge loss of men, cattle and land. Mata assured Nag Devta of restoration of the precedence and that Nag Devta shall be considered first amongst all her devotees, being an ardent devotee of Mata. After that incident a huge flood washed away the whole  Temple including Shila(Mata) and a Trident, however, a Chela saved Shila and trident from the flooded river and temple was constructed at new place. The veterans showed me the place at which the temple was situated earlier.

Click for the article: Tourist Places in Jammu Region

Geographically the place looks immune from flood. There is no overhead river, the place is elevated to safer height. But legend says , it has happened which in itself is a miracle.
From this legend I arrived to decipher the term Naghoi . It may be a combination of two words Nag(nag Devta) and Agwahai ( in witnesseth of or the one to be given primacy of). Naghui means a Mela to be held in witnesseth of Nag Devta. This is purely my personal deduction. The question is still there to be answered. Naghoi festival is also celebrated in other parts of Paddar and Pangi (HP). What are the fables and legends associated with naghoi in these areas of Paddar and Pangi ? A comparative research may give some clue about the term Naghoi. Let’s ponder it over.

These are collections of stone plates at one point. Every plate has inscribed on it  mantras in Bodhi language incorporating the message of compassion of Lord Buddha.
  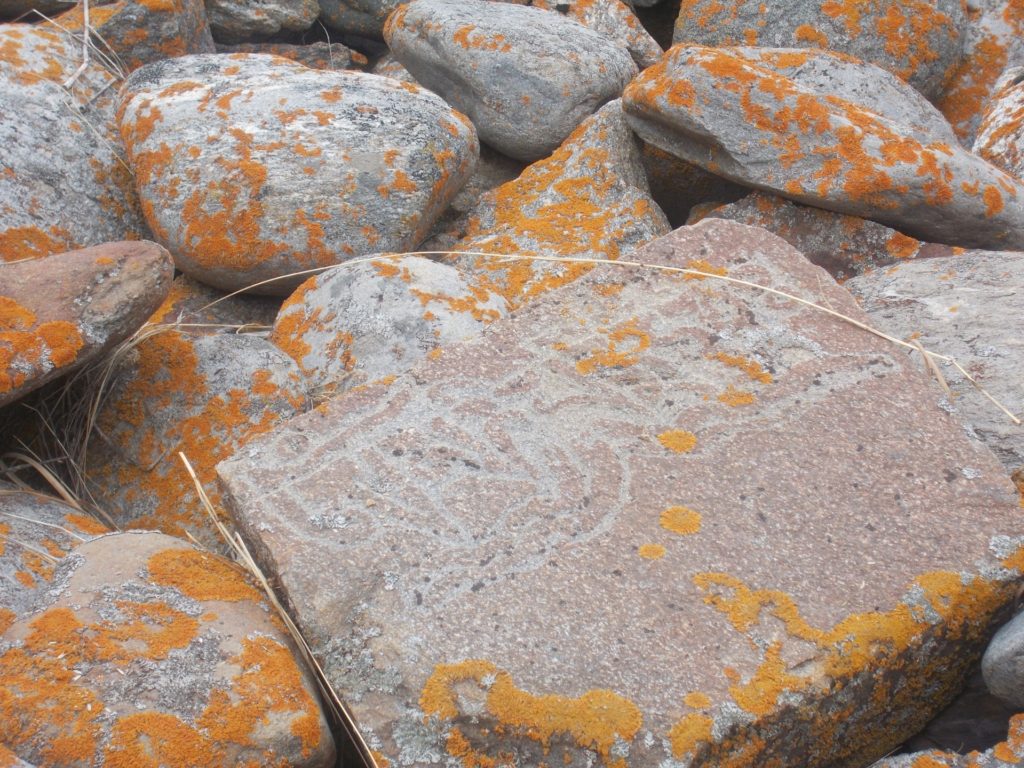 During my trekking in Gandhari valley I  found as many as fourteen such stone ensembles. Local Buddhist populace called these as Mane. These ensembles of stone plates are of different sizes. The largest among these is about forty feet long , fifteen feet wide and three feet high.
  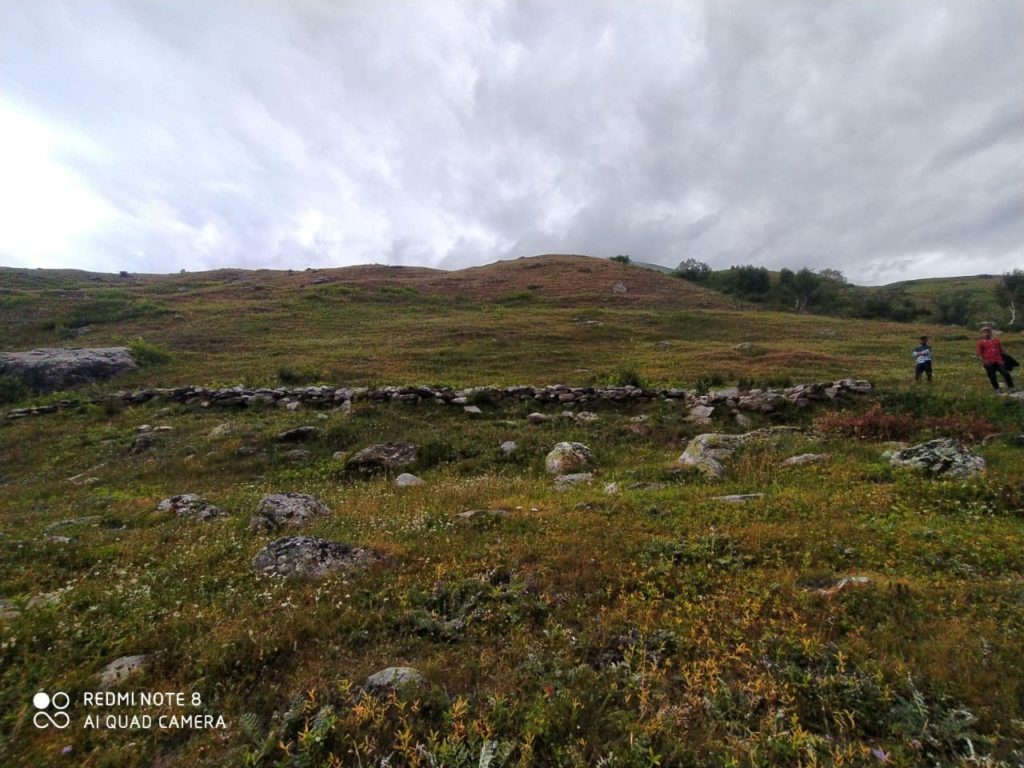 The people travelling along this track don’t forget to circumambulate the mane. It is said that circumambulation of Mane help forego the sin one has committed in ones life time.
  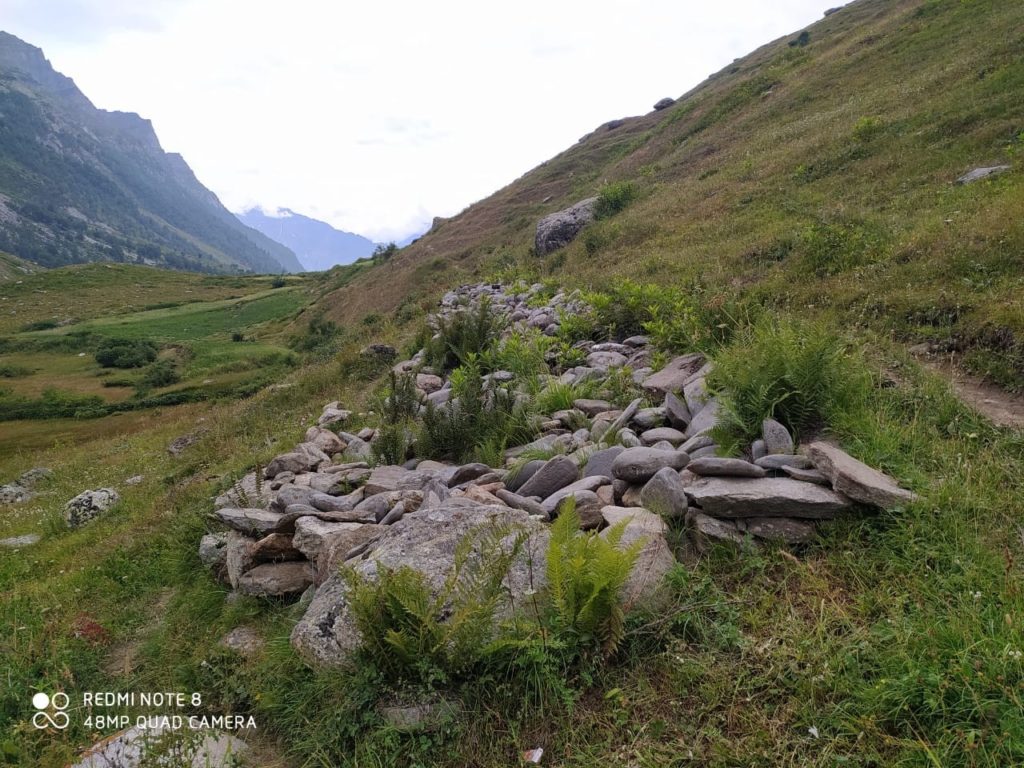 These Mane are made hundreds of years ago but greatness of the time is that not even a single plate is displaced.

Bannkakri in local dialect is called bannbakri. I got a magnificent sight of a wild plant. I have never seen this before. Elated by the charm of the plant I took a click. When we reached over 5000 meter above sea level we had the glimpse of this plant. You  too Give a look here।।
  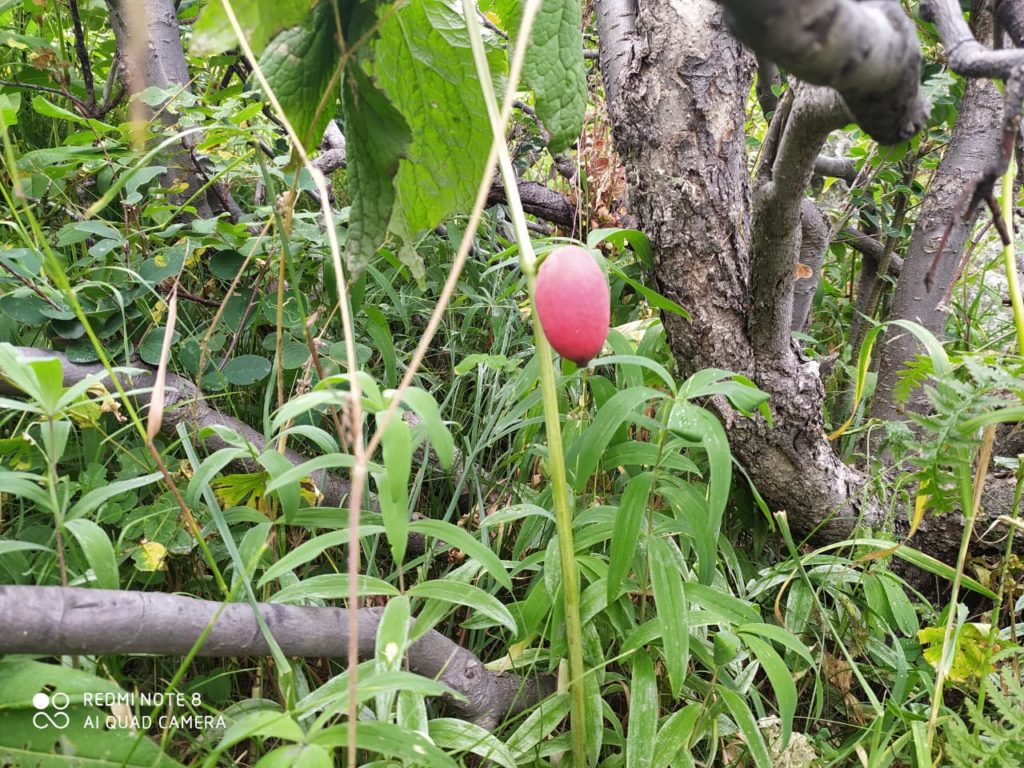  
The botanical name of banbakri is podophyllum emodi. Also known as Himalayan May Apple bannbakri is a single stem plant bearing one or two fruits. This fruit is edible and relished by Himalayan people. The bannbakri plant has several medicinal properties. This temperate plant is known for  treating hepatic, gastric and skin diseases. As is evident from the picture these plants grow under shadow of stone and tree. 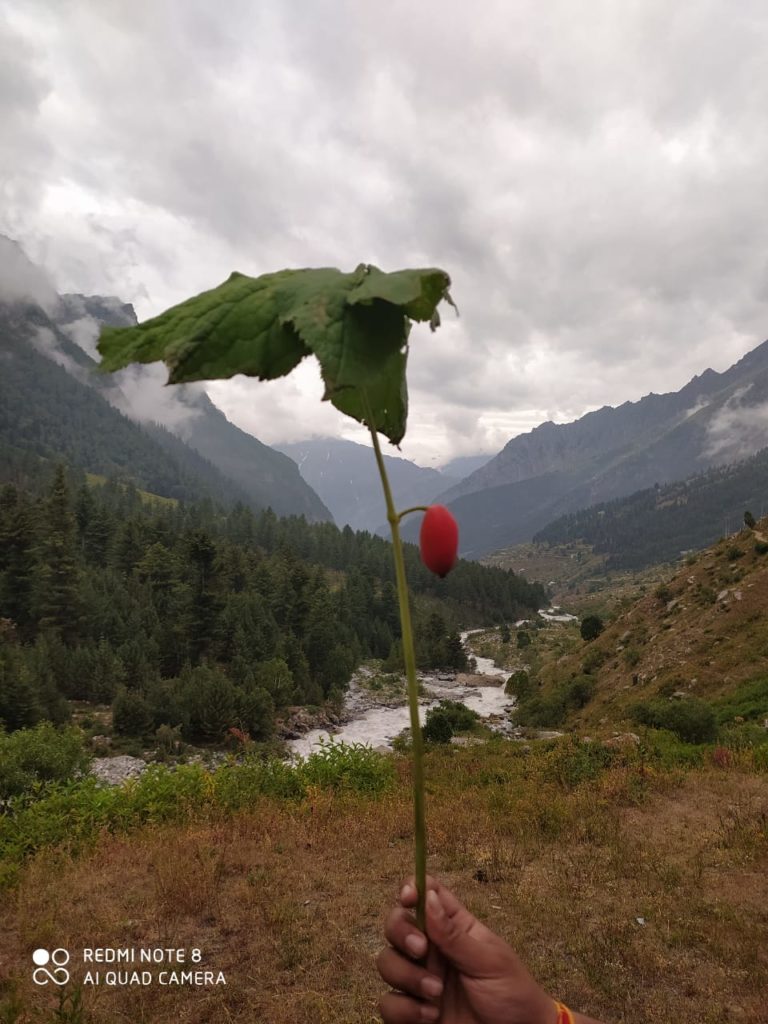 Trekking offers the trekker the treasure of the nature. Though this entire valley is widespread with water bodies; River, riverine, rivulet, water streams and waterfalls are ubiquitous but ghomsar water is king of all waters. It is regarded as the most digestive water in the valley. Though no research has been done about the digestive properties of this water, yet I have some anecdote and experience about this miraculous water to offer to you.
  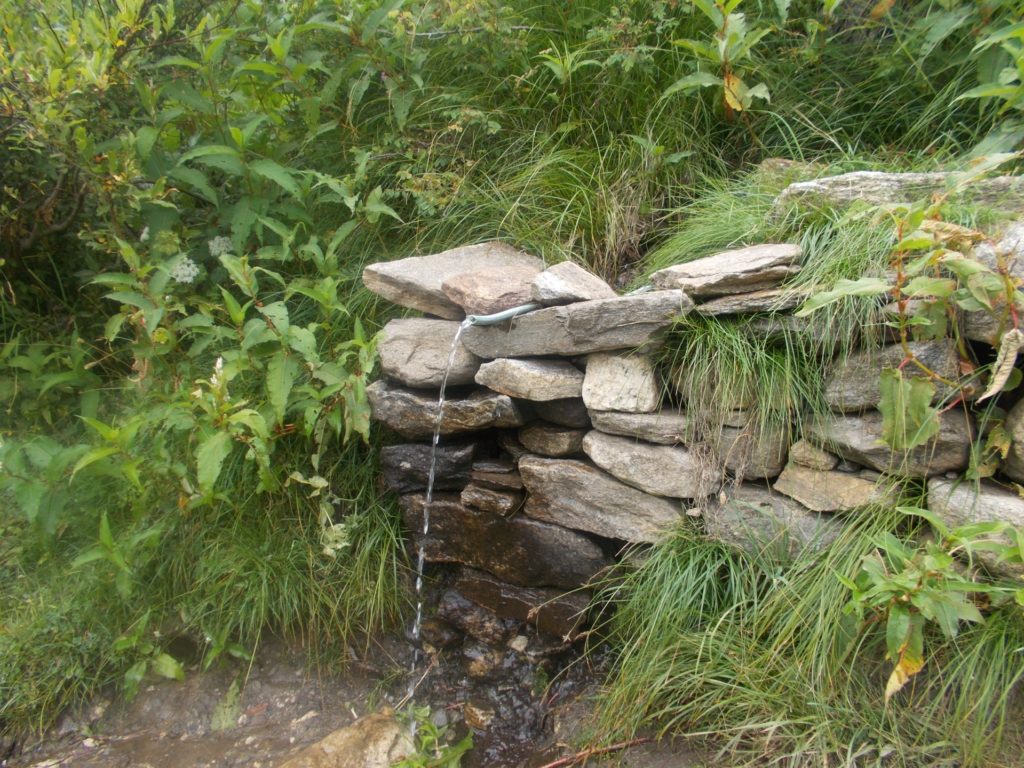 (pic. Ghomsar)
Here it goes।
Once three friends much like Tom, Dick and Harry planned a booze party reached out  to  this spot keeping with them all the  stuffing such as Liquor( over 5 litre) and sufficient amount of snacks etc.
 
They had a booze party engulfed 5 litre country made  alcohol yet they  did not  felt a tinge of drowsiness thanks to Ghomsar. They got the mesmerizing location suitable for  party but they chose wrong edible liquid. 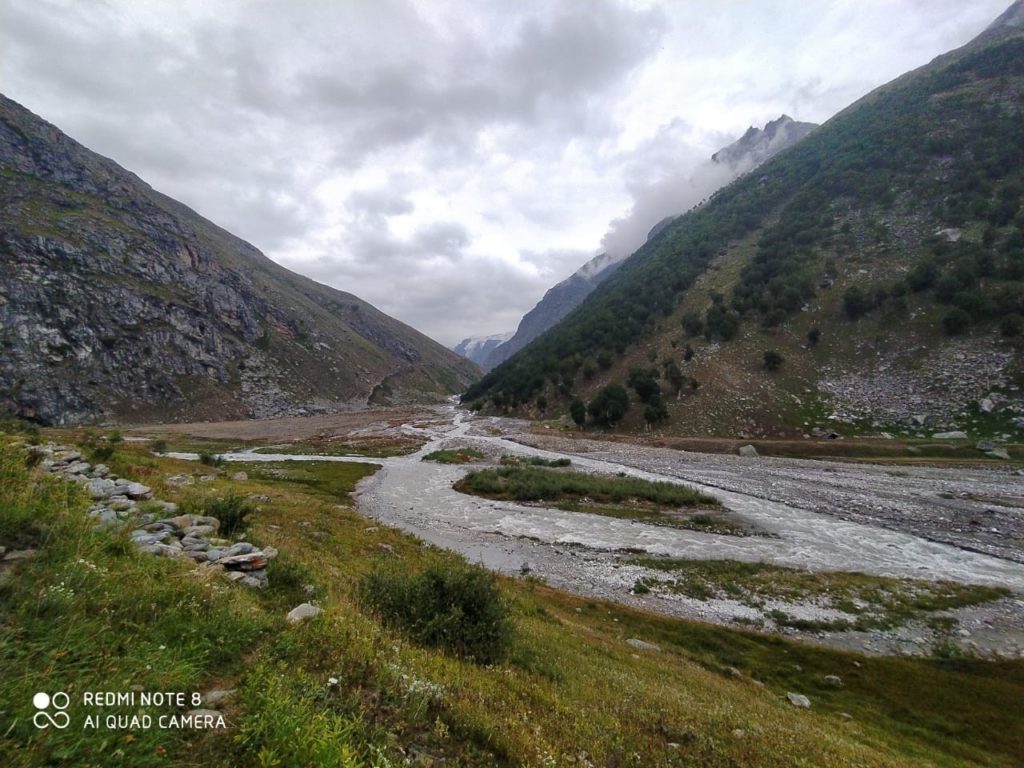 Second, I have an opportunity to organise a small cricket tournament in Gandhari. I had chosen the Sinyote Plane for the game. Coincidentally it was festive season I had plenty of proteinitious diet  these days; milk , curd, cheese and ghee . I was young lad of touching my 20 when digestion was not a sort of problem whatsoever. However, I had eaten it in plenty.

Click for the article: Martyr JCO Chuni Lal- A War Legend of Paddar

The boxing Day came we proceeded to the spot for game in the meantime I got my belly troubled, I turned pale, with freightend head and trembling legs I continued my walk to reach ground. Travelling for one hour or so I reached Ghomsar like others I also had that miracle water may be a few hand cups more. Quite unbelievably after taking 20 odd step towards the ground I felt completely freshen and well and so conducted the tournament successfully, courtesy Ghomsar.
What exactly contribute to its miraculous properties is a matter of research but certainly it is god’s most beautiful gift to the valley.

Trekking the high altitude mountains and meadows is not always a pleasurable job. It is full of challenges and hardships. Some of the common problems a trekker encounters is breathlessness, nausea, high altitude anxiety and dehydration etc. In such situation the trekker doesn’t find access to medical help.
  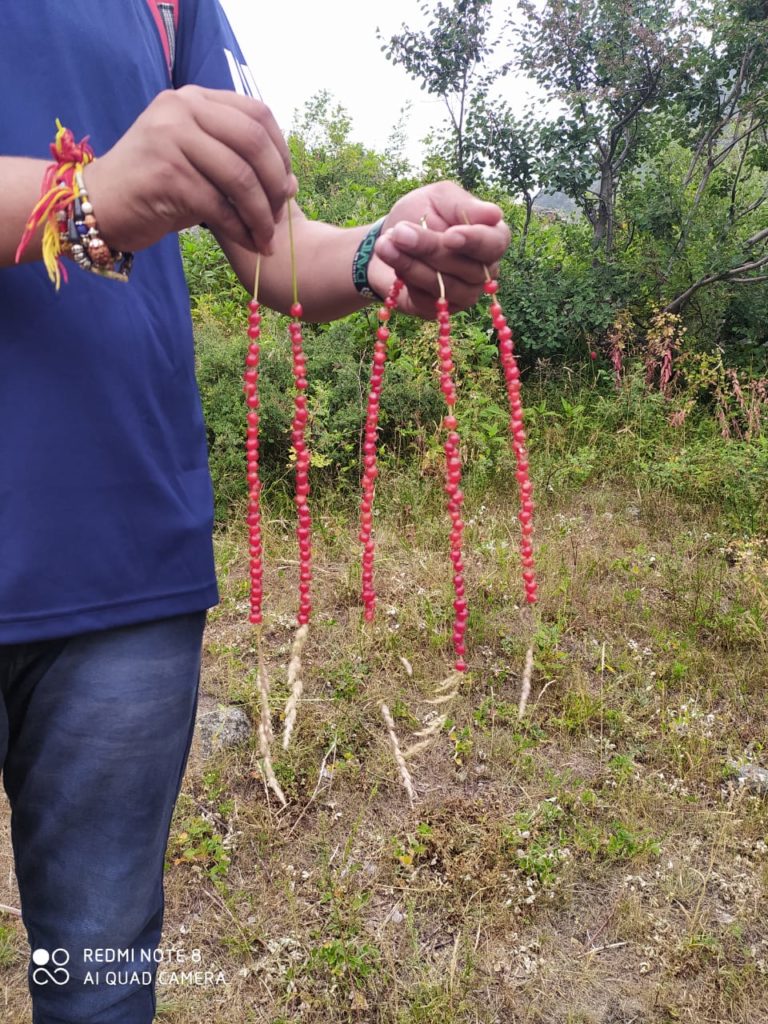 The only succor they can get is from natural resources available there. From my trekking experience I suggest that one easily available fruit is red bulb fruit . In local dialect these are called Aanch.
  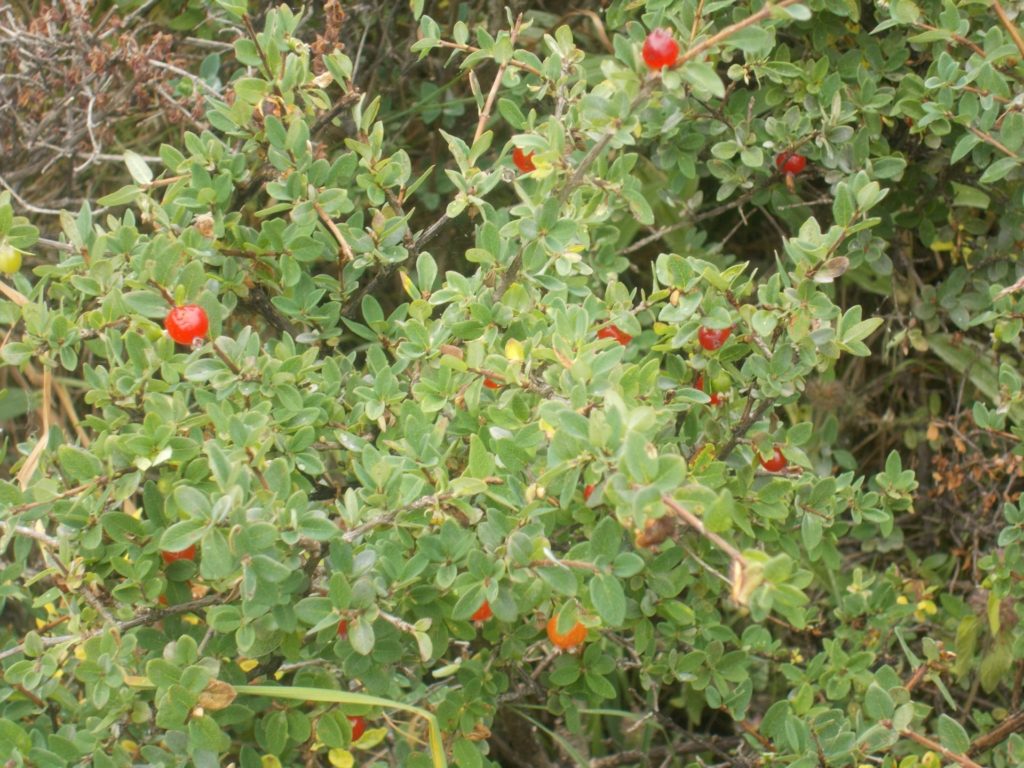 pic. Aanch (waterberry)
This tiny fruit is easily available across the track. Since, it is advisable to go for trekking during summer that too in the month of July and August. In these two months these Himalayan berries are   available in abundance. Though this tiny fruit seemingly looks less useful but these provide necessary nutrients to keep one active and lite. Water being the major constituent this fruit will keep you hydrated all through the trekking. Since, water is major constituent of this fruit, so this can be called as waterberry. I had tried to gather some biological and nutritional information from my friend from bio and botanical fields. However, all are clueless about this fruit. Which shows no research data is available about the fruit.

There is a lot to be seen and explored. From research point of view the area has much to offer. Come with inquisitive mind and let the world know about the treasure of nature that Paddar has. With mesmerizing beauty abound, the area has potential to be considered as health resort, for the virgin mountain, smoke free air, pure mineral water, unadulterated and chemical free foods will help you rejuvenate, but do come with a cheerful heart and respect for nature.